The Surprise Halloween storm of 2011 brought 12″ of snow to Tolland. Ray and I, knowing there would be snow, had planned on a quiet weekend of hiking, snowshoeing and putting our house back in order after the whirlwind French Exchange. Well, we got the hiking in on Saturday morning, but then it started to snow. Massive outages were predicted due to the wet white stuff and the leaf-laden tree branches in this atypical autumn.

We didn’t really believe it. After all, we had just experienced a five day outage in August with Hurricane Irene. Could this really be happening again, and so soon? Alas, the answer was yes. By 4:30 pm we had no power. We managed to get the gas fireplace on before the power went out so we thought we were OK. Plenty of wine, a lamb steak to cook on the grill, yummy vegetable leftovers to heat alongside the lamb. Plenty of candles. We set about to make dinner on the grill. We made it through the first night.

But then on Sunday morning with all the snow on the deck, making coffee seemed problematic, so I sent Ray out to find some, not realizing how terrifying it was going to be. Crystal Lake Road was barely passable– dangling power lines and tentatively hanging tree limbs were everywhere. The ominous sound of snapping branches echoed through the woods. There was nothing open anywhere. No coffee. So we cleared the path to the grill, made one last pot of French press, and then hurled our laundry, our bikes, and our electronics (one macBook, one iPad, two iPhones, one iPod and two digital cameras) into the car and headed to Rhode Island.

And then we got the call–no school for two days. Staying with Ray’s dad was fun, but this was an opportunity too great to pass up. A first-ever fall vacation! Ray’s company had no power so no trucks were going out, and, oh yeah, there were no restaurants open to deliver to so-o-o… we decided an adventure was in order. Margaret suggested hotels.com and we got an amazing deal to stay at the Biltmore in Providence. But first, this beautiful sunny day in Rhode Island, such a contrast to the frozen landscape we had left, deserved a bike ride. The 28 mile circuit was a little more than we had done recently, but the conditions were perfect and there were few riders out on the trail so it was optimal cycling. We then checked into the Biltmore and found our first in a series of amazing  restaurants. New Rivers has been in Providence for twenty something years. It is just at the bottom of the hill, across from downtown, and is in a nicely restored old industrial building with tomato soup colored walls and twinkling lights. We felt like we had walked into a dream. The menu, and the wine list, were French inspired and the staff was friendly. Soon we were chatting with the owner and trading “when I was in France” stories. Duck cassoulet, autumnal vegetable platter, cheese and charcuterie were among the dishes we sampled. A stellar first day away from the storm!

The next morning we had our first cup of coffee in the hotel Starbuck’s and then headed out for an urban hike. First stop was a second cup of coffee at Café Choklad – a Swedish (of all things) breakfast place. Then we headed the Rhode Island School of Design’s museum – easily my favorite small museum on the planet – and that is saying a lot! We were so enthralled that we became members on the spot, and hope to return often. Not only is the collection exquisite, but the colors of the wall, the careful display of the pieces, the magical views as you gaze from one room to another, all combine to make this  well worth a trip by itself, and yet that was not all we did! It was here that I got the word – no school for the WEEK!!

This was pretty exciting–and certainly unprecedented. So after the museum, the sun now warming the streets, we continued up the hill, through the Brown campus and down to Wayland Square. We had lunch at La Laiterie, a cheese shop (the Farmstead) and restaurant combined. It came highly recommended by Margaret and Maggie and we were not disappointed. The charcuterie platter was especially amazing! We then continued our hike, stopping for coffee at the Coffee Exchange and wandering back downtown. For dinner we stopped at the bar at the newly opened Dorrance. The food is still a work in progress, but the setting is spectacular.

We were running out of clothes, so on Wednesday morning a stop at City Place Mall seemed a good idea. We then headed out of town to our other favorite Rhode Island bike path, the Blackstone River Bikeway. After an easy twenty miles along the river and canals, past waterfalls, old converted brick warehouses and factory buildings, and yellow woods, we headed back to town to meet up with former student Corey Anderson. Corey is a culinary arts student at Johnson and Wales, one of the nation’s premier schools for would be chefs, sommeliers and restauranteurs. Corey gave us a tour of the campus and we were amazed! We felt so fortunate both to have Corey as a guide, and to be there during the week so we could peek into the labs and see classes taking place. It was so cool! All the students were wearing white lab coats and toques, and the classes were very hands-on. There was wine-tasting, coffee-making, cake-baking and everything else you could imagine. The modern glass building was full of light and activity. There is also a culinary arts museum –our second favorite museum in Rhode Island!– and yet another delightful surprise on this most amazing voyage.

A wonderful day was capped by another great meal, this time at Siena on Federal Hill. We have never been able to get into this restaurant, although we have been trying for years. We were not disappointed. Even on a Wednesday night, the place was hopping. We split a caesar salad, a delicious mushroom and truffle-oil pasta, a tuscan veal scallopini and an etherial tiramisu. 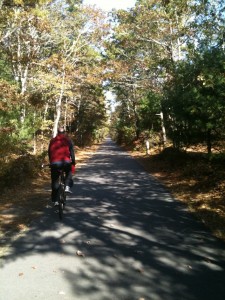 This was all very well and good, but I don’t stay in one place for long and by Thursday I was ready for a road trip within a road trip. The climatic conditions were perfect for a day on the Cape Cod Rail Trail so off we went. I had had several thwarted trips to this trail, so finally getting there on a beautiful day with no crowds was particularly sweet. We cycled mostly uphill from Dennis to Orleans, thinking our trip back would be easy, so we stopped for lunch at the  Land Ho – a kitschy red checkered table cloth place in Orleans. Ray wanted chowder, which I don’t normally order because it’s usually either too gloppy or too boring, but this chowder was the best I have ever had. I made him let me eat half. Back on our bikes, we found we were cycling into strong headwinds that had suddenly sprung up. Not exactly surprising on the Cape so we just kept pedaling–pretty slowly–even downhill. Good for the thighs and the burning of calories. On the way back to Providence, Ray conducted some frantic business on the phone and we sailed into the sunset. Our last evening was spent at New Rivers where we talked to more people about France, one of whom is the aunt of a former student!

We will never forget this trip–particularly since I have now written it all down! 🙂 Who knows when school will open again, but we are headed to the North Shore (MA) tonight after a day back in CT (me at Starbucks, Ray at work). And if we don’t have power back on Sunday, we plan to spend the night with friends in Longmeadow.