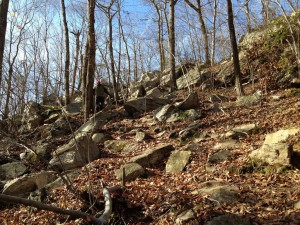 Having barely had any exercise since we returned from Boston two weeks ago, I was very anxious to get outside this weekend. We thought a hike on Saturday and a bike ride on Sunday would be a good idea given the glorious weather. For our hike we headed down to Cobalt, CT–I know, you’ve never heard of it! It’s a tiny place near East Hampton, roughly across the Connecticut from Middletown. To get there you take route 66 east from route 9 to the intersection with 151 (Depot Hill Road). Turn left, then at the fork bear left up a steep hill. You then turn right in Gadpouch Road, and after it turns into a dirt road, look for blue trail markers on the left. There is a little semi-circular pull off across from the trail where you can park. It is hike number #25 in the book 50 Hikes in Connecticut. The very first part of the hike takes you through some mucky terrain and across some brooks, but the tall trees and the craggy outcrops had us oohing and ahing despite the distinct possibility of wet feet and turned ankles. Soon however, we were climbing through the rocks up to the top of the ridge. There were plenty of downed trees due to winter storm Alfred but some had been removed from the trail, and others already had a beaten path around them, so they were not as much an obstacle as we had feared. 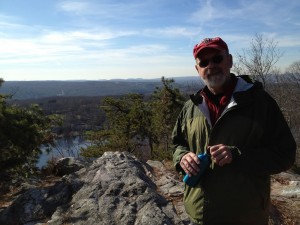 Once on top of the ridge, we admired the views of a small lake below and the twisting Connecticut in the distance. I was ready to eat the steak, fig, spinach and mustard changes I had made, but Ray said “Not yet!””Fine” I sighed. We continued along the ridge, heading north towards a cascade we were supposed to reach after 2.5 miles. It was not particularly difficult because we had already done the biggest part of the ascent, but going around the enormous trees and being careful not to lose our footing on the many loose stones beneath the leaves had us moving more slowly than we had hoped. I glimpsed a deer  leaping through the dappled sunlight and Ray stopped to admire the shapes of the huge recently fallen trees. The weather was so perfect! The only thing giving away the mid-November date was the daylight that made it seem much later than it was. This and the realization that it was the first Saturday of the hunting season had us turning around not long after we encountered some old-timer hunters at a road crossing. The cascade, only about 1/2 a mile away, would have to wait.

Still, we got back to the car unscathed, albeit a little muddy. The descent is the most difficult part for me so I was glad when we were out. Ray’s knee held up magnificently. And he even had enough energy to go out to dinner! 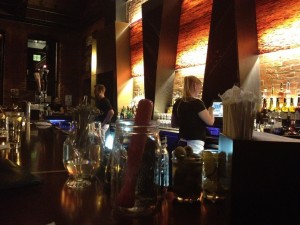 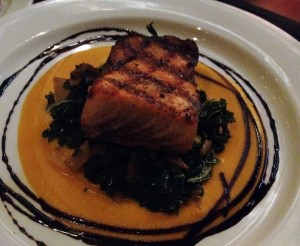 We decided to go to Firebox in Hartford. It’s such a cozy place for an autumn meal. We sat at the bar, which is what we normally like to do. It is at once more intimate and more social. It was quite a challenge selecting a bottle of wine, but once the mission was accomplished, we selected our food. Ray had the duck, which I barely even saw it was consumed so rapturously and so quickly, and I had the salmon–beautifully plated. The colors and the balance of flavors and textures were exquisite! The chianti was a perfect accompaniment.

Sunday morning we arose, did a few chores and errands and then headed to our local bike trail in Vernon. We were prepared to find it closed, or at least difficult, but although there was massive destruction of venerable old trees, the trail had been cleared. There were quite a few “widow makers” dangling overhead, but plenty of joggers, strollers and fellow cyclists were out enjoying the beautiful day, seemingly oblivious to the dangers. We joined them. Sixteen miles is a mere jaunt now and we pedaled along contentedly. It is rare for us to be on this trail among barren trees, but we did see things we never knew were there. The gentle and unseasonably warm afternoon light filled us with a glow of “bien-être”. We are not sure how many calories we burned, but we feel we deserve the Cornish game hens on the menu for tonight. 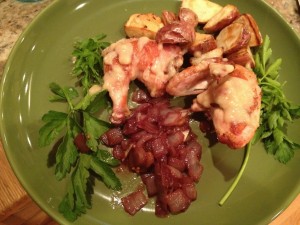 The Cornish game hens with onion compote were yummy. I had to go to Highland for the hens, where I bought the only one they had. It was certainly enough for two, so I only made 1/3 of the recipe. I added a little of the fig mostarda compote that Marsha had given me, and I used less sugar than called for, but other than that I followed the recipe. I roasted some little potatoes with the hens and we had a spinach salad. The hens were succulent and the onion compote was a great addition. I made the pan sauce, but it might not have been necessary. Ray had hoped to serve a Chinon, but was disappointed in it, so we had our standby Campuget Costiere de Nimes. We’ve said it before, but Rhone wines seem to go with everything! Chateau de Campuget is particularly delightful because it always brings back the wonderful lunch we had there last summer.