We really envisioned traipsing off to the train station in the pouring rain. That’s how dismal the forecast was. And it did rain all night. But we had a blissfully dry walk to the train station, and then once we pulled out of the tunnel the sun came out! The train to Bergen is known for the stunning beauty of its route through the mountains. It is apparently the highest train in Europe, crossing the Hardangnervidda Plateau. From the moment we left Oslo, we were captivated by the variety of the terrain we traversed. First came rolling hills interspersed with shimmering fjords, and white houses nestled into wooded hillsides. Later, as the population thinned, we saw farm after farm, and then gradually we ascended above the tree line, where we feasted our eyes on jagged granite cliffs, soaring peaks, silver lakes and rushing rivers. This must be a hikers’ paradise, and we were a little jealous of a group of biking and hiking young people we saw at one of the stations we stopped at. I had upgraded our train tickets to first class so we were extremely comfortable, and we had unlimited cups of free and delicious coffee! But it was impossible to take photographs, so a little video captured some of the beauty.

The Bergen Train Station sits at the top of a cobbled pedestrian street that winds its way past bakeries, coffee shops and small restaurants featuring cuisines from a variety of non-Scandinavian countries: Thai, Indian, Peruvian, Mexican, Italian, etc. After a walk of about ½ mile, we easily found our hotel, the Scandic Strand, perfectly located across from the fish market right on the port. This gave us easy access to the boat for our fjord trip, the tourist office, plenty of restaurants, galleries and shopping, the funicular up to the peak above the city, and the bus to the airport.

Our room (303) was on a corner overlooking the port. The view was stunning and the room remarkably large by European standards. We had two chairs and a little table in front of the window so that we could sip a drink while tranquilly enjoying the activities of the harbor. Our only complaint—very intermittent wifi! My MacBook Air was happier with it than our mobile devices, but for serious Internet use, we needed to be in the lobby or the restaurant. Not necessarily a bad thing, as both were comfortable and offered views of the port. 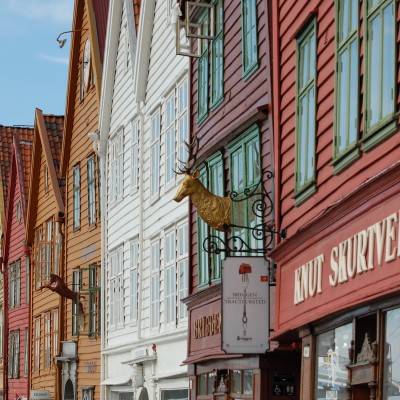 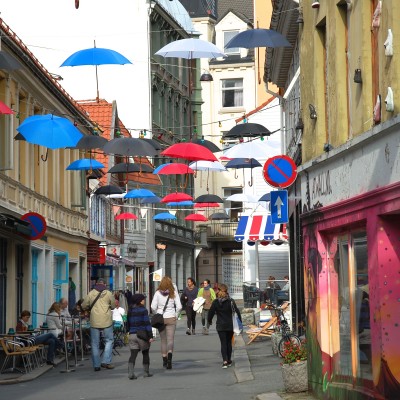 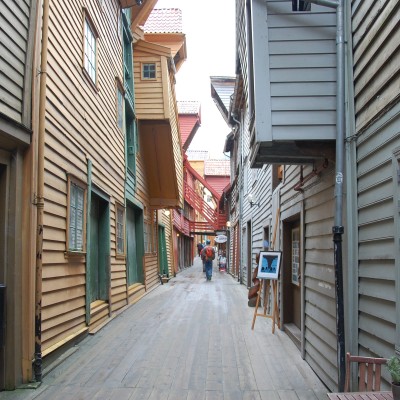 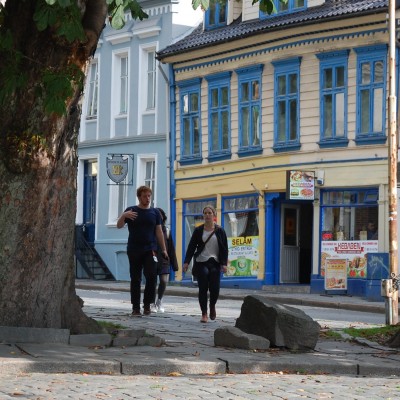 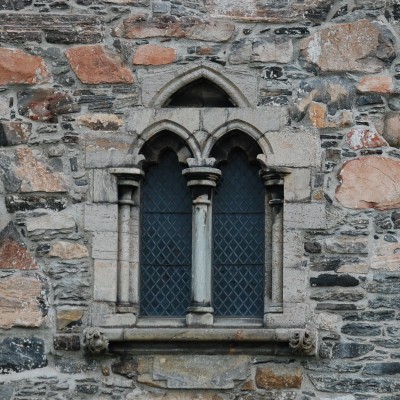 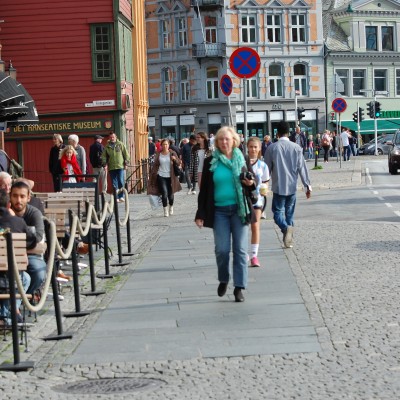 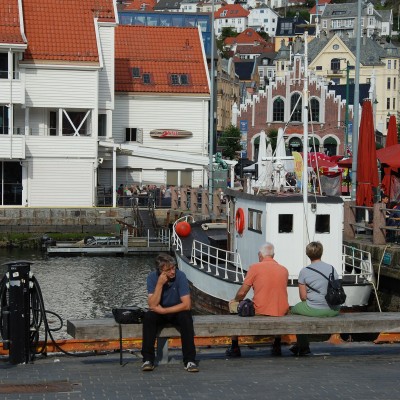 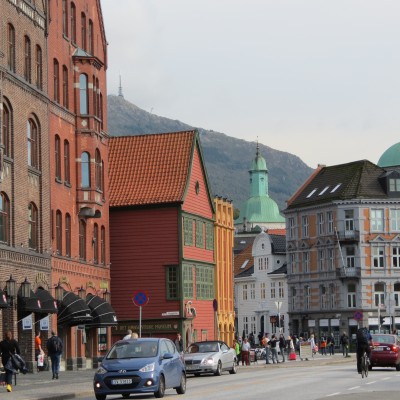 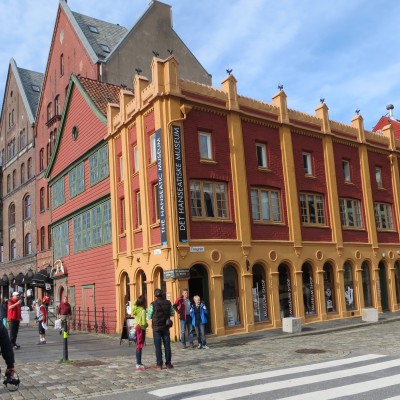 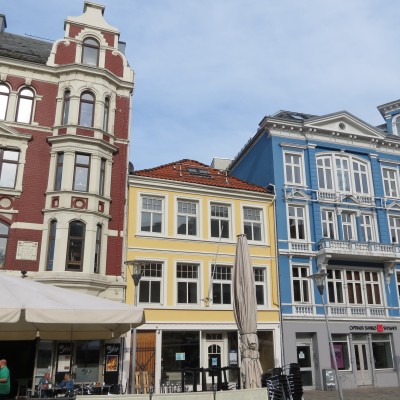 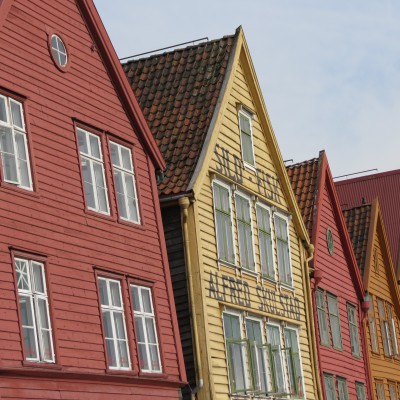 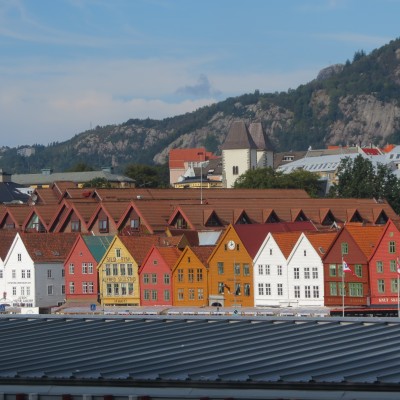 The weather forecast had not been good, but the skies remained clear throughout that first evening so we were treated to the sight of silhouetted masts against a beautiful sunset. We found a traditional Norwegian restaurant in the old port and dined on fairly simple fare at Bryggen Tracteursted. 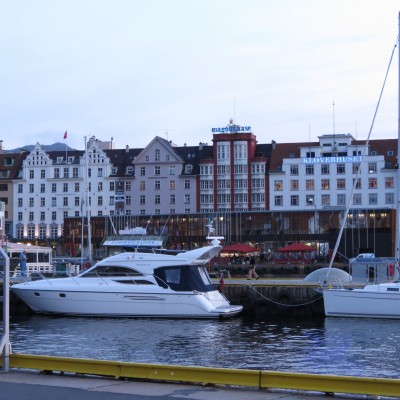 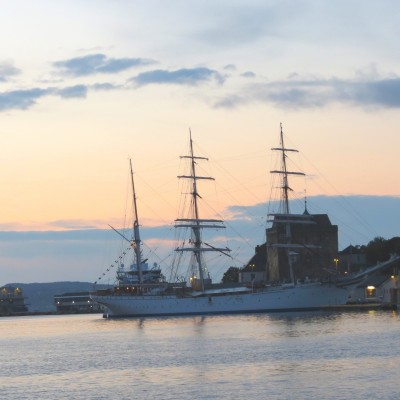 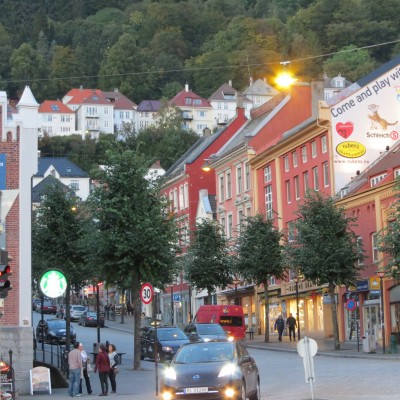 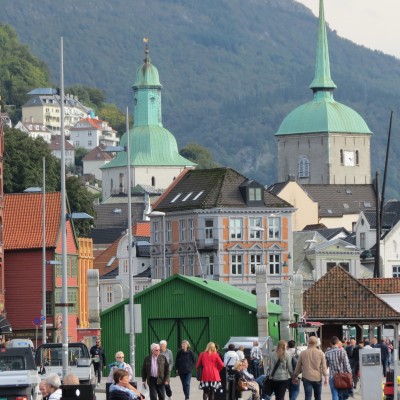 Ray has fond memories of breakfasts in Stockholm and was looking forward to three different kinds of smoked and pickled fish for breakfast in Norway. He was not disappointed. There was also ham, cheese, cucumbers, fruit, eggs, pancakes, many different breads, cereals and yogurt. In other words you could be as healthy or a decadent as you wished! And once again, good coffee with a view!

Tuesday did dawn a little misty, but not really raining. It was a perfect morning to check out some museums (the Hanseatic League one was good) and do a little pre-shopping. We had lunch at a very cool hipster spot called Pygmalion, where we had some open-faced sandwiches and a glass of wine. We then went next door to Godt Brød for our coffee and pastry and the weather had improved enough to sit outside. With all that food, a little walk was in order. We took the funicular from the Fløibanen and the view of the city and surrounding fjords was spectacular. We walked a little through the woods and expected a family of hobbits to pop out at any minute. You could do some serious walking up there, but we were going to be a little pressed for time, so we just ambled down the twisty trail to the port, taking photos and admiring healthy Norwegian joggers as we went. 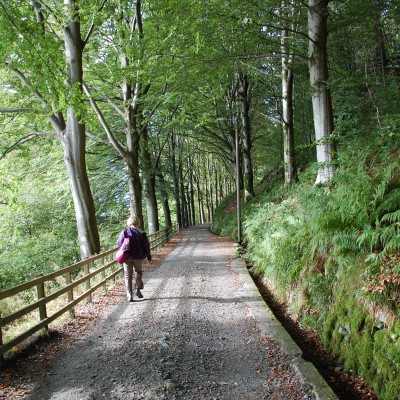 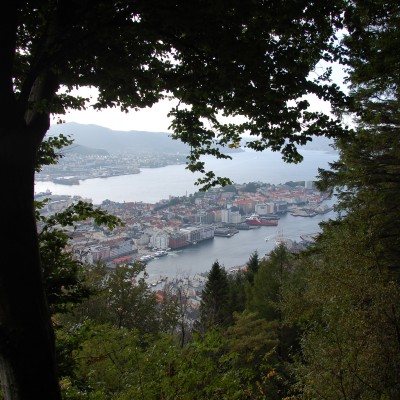 Tuesday night was the all-out gourmet meal of the trip. It was at Potetkjellleren (Potato Cellar). We donned our requisite black outfits, I put on a necklace and we entered this tiny, candlelit, sub-terrestrial restaurant. Ray quickly abandoned his “I’m a wine expert stance” and followed the suggestions of a very capable sommelier and her apprentice. The result was an exquisite meal with perfectly paired wines. There were some international diners, but most seemed to be business people or wealthy artsy types. This was not a place for most tourists, but we gallantly closed our eyes to the prices and have no regrets.