We were driven to the airport by Edgar, another vivacious Xhosan, and Ray, of course, got his whole life story. Leaving the reserve we saw the most majestic gathering of animals of the whole trip! We left the tiny Hoedspriut airport (which, btw, was adorable!) and flew to Cape Town and then caught another plane to George, a medium sized town on the Indian Ocean. It was back tracking a little, but the connections were easy (even if transferring made us trek all the way through the airport and back–at least our luggage was checked through). 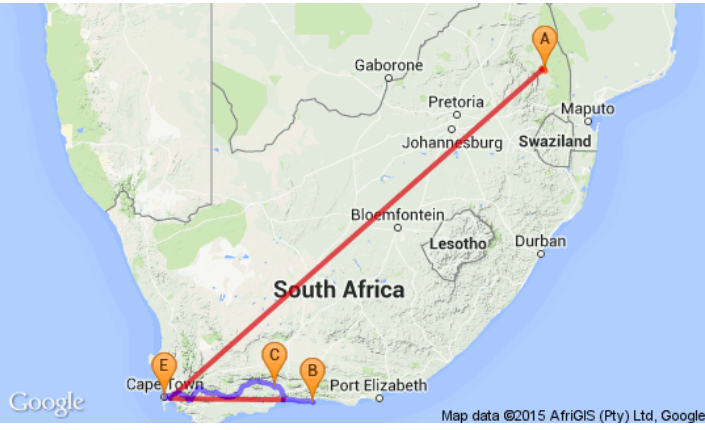 Red lines are flights and blue are driving routes

Upon our arrival in George, we walked the few paces to the Bidvest car rental office (apparently Bidvest is Budget) and a charming young guy helped us get our car. He seemed very interested in American football, though his knowledge was scant.

So off we went as the sun was setting in our little Toyota Corolla to test Ray’s skills and my patience at driving on the left. It was a little scary at first. And since not only is the steering wheel on the opposite side of the car, but also all the controls are reversed. Good thing we insisted on an automatic even though we both drive standard! It was enough to conquer turning on the blinker instead of the windshield wiper whenever we wanted to turn! Fortunately the roads in South Africa are wide (unlike in Ireland) and well marked, but not well lit after dark, so take note. The first part of our drive, while it was still light, was beautiful! We hugged the coast and realized just how mountainous the Western Cape is, right down to the sea. But as it got dark it was a little stressful and I did turn on my iPhone’s GPS to help us. I really, really tried only to use my phone only on wifi, but we did purchase a data plan for events like this. A good call. After about an hour and a half we arrived at the Robberg Beach Lodge in Plettenberg Bay (aka Plett). We could hear the surf crashing on the other side of the street, but we couldn’t see it.

The very nice concierge named Victor assisted with luggage and showed us our gigantic modern suite with a balcony and a wall of glass overlooking the sea. He also made a reservation for us at The Fat Fish in Plett and got us a cab–we were done with driving for the day! Our cabbie, Noel, was “Colored”–not 100% Black and it is an official racial designation in South Africa. He took us out every night we were there. Unfortunately there is little in the way of public transportation in South Africa. Either you fly, or you drive, or you take a cab. It is super inexpensive to take a cab in South Africa – our most expensive ride was about $7.00 and usually it was under $2.00. In Plett, Noel is *the* cabbie and everyone knows him. When I left my phone in his cab (ok stop laughing) but realized it immediately, the restaurant called him and he came right back with it.

We did do a bit of walking, but watching for cars coming from the wrong direction at high speeds was daunting, the hills were steep, the streets were dark, and the taxis were cheap, so… Plus, Ray’s willingness to engage anyone and everyone into controversial conversational topics made for an informative experience for all. Hiking also, although possible, is not as easy as one would think given the vast number of national reserves and parks. It turns out that you need to book a guide in a lot of places, because it is dangerous for a variety of reasons. But the hike in the Robberg Nature Reserve was an exception, as was the hike to the Storm River Mouth suspension bridge in Tsitsikama National Park.

The second night we ate at a highly acclaimed restaurant, Nguini. Nguini was good, with a charming venue and attentive service, but we kind of preferred Fat Fish because of it’s laid back style, good, unpretentious fare and incredibly friendly staff. We went there for two dinners and one lunch and chatted extensively with our servers as well as a young local musician who played the blues. We had another memorable meal in the National Park at Storm River. Something to note is that several of the national parks we visited had really decent restaurants, often in a stunning setting. On an American budget, dining out in South Africa is a bargain, and the food and wine were great!

While I’m  thinking about it, a note on tipping. Everywhere you park there will be locals in neon colored vests waiting to “help” you, and to “watch” your car. Give them a few rand (like 10 or 20)–it’s practically nothing but it means a lot to them. In restaurants tipping 10-15% is acceptable, but we always tipped our usual 20%. It just seemed liked the right thing to do. And arriving in airports there also may be helpers. The official ones will have vests, so be a bit vigilant about that. When we first arrived in Jo-berg we were practically assaulted by hordes of guys wanting to help us get checked into our second flight. We picked the one who seemed the most official and he did really help us get into the right lines. We tipped him, but not as much as he was hoping from jet-lagged Americans who hadn’t yet figured out the currency. Oh well.