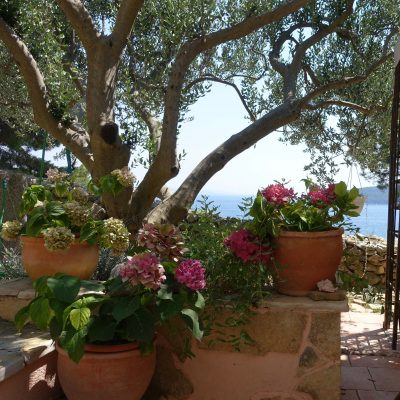 Adriatic view from the terrace of our rental near Split

When our daughter invited us to join her and her family in Croatia we jumped at the chance! Our last trip to the country formerly known as Yugoslavia was in 1972 when we camped along the coast before driving inland and south to Greece and Turkey. At the time, it was not only a barren and rocky landscape, but there was very little in the way of facilities for tourists–or inhabitants for that matter. We will never forget that lack of fresh vegetables and the cans of terrifying looking food whose expiration dates had long since passed. I also came down with the mumps while we were camped near the tiny town of Jelsa on the island of Hvar. But that’s another story! All in all, it was an unforgettable adventure but not the most pleasurable. We were eager to see it all again, and this time the experience was much more pleasant!

The two biggest tourist destinations in Croatia are Dubrovnik and Split. On this trip, our own visit was limited to Split and an amazing motor boat ride among the many small islands that dot the nearby coast. Other designations to consider if you take your own trip are: Rovinj, Pula, Hvar, and Zadar on the coast, and the Plitvice Lakes

We used Trip Advisor to find a rental for the several days we were there. We filtered our search by looking for places with wifi, AC, and outdoor space, and this is what we found–Villa Karina! The setting was spectacular, the house was simple but met our needs, and the host was awesome.

Split itself is a really cool place, full of Roman antiquities, vibrant cafes and ships sailing in and out of its harbor. Mostly, we bought groceries at Konzum, one of the several supermarkets that are sprinkled around the edges of the town, since traveling with a toddler and our own joy when preparing meals for our family were key factors for us. However, there are plenty of good restaurants in Split. If you can venture a little beyond the port and many squares, food will be more authentic and less expensive. We were a little too hungry when we arrived for lunch, so ate in a pretty, shaded tavern on the main square. We were lured in by a pretty young woman who eagerly explained the menu in English, and well, as I said, we were hungry and we had a toddler with us. The food was really good! Margaret didn’t get the dish she ordered, but everything else was great. The attractive cheese plate that arrived quickly was ostensibly for Teddy, but we we all dove in! There was also a spicy shrimp dish, some grilled fish and a fish stew. By the way, smaller fish are usually served whole in  Europe–that is with the head and backbone all attached. It is really easy to lift up the tail and pull out the bones and head in one quick movement, but it does take just a little practice. They will do it for you if you don’t have the heart, but I enjoyed showing off the skill I learned living in France for my family! 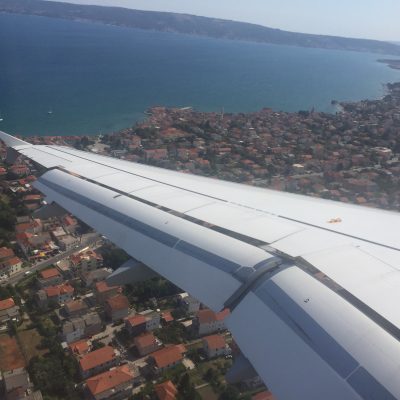 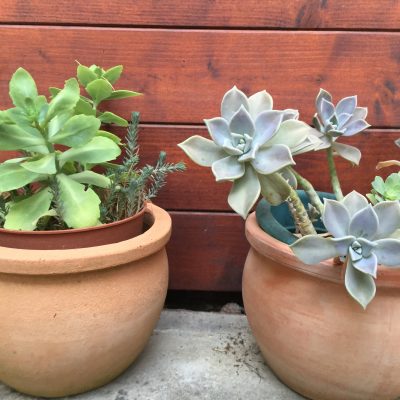 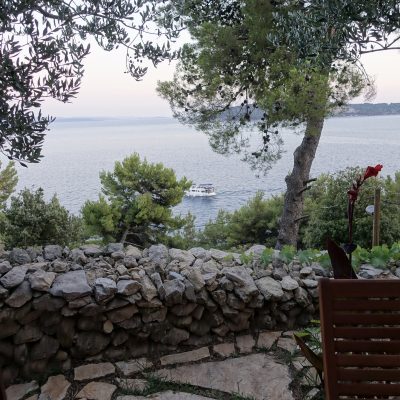 View from our villa 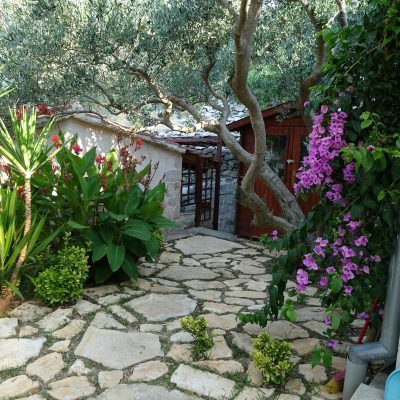 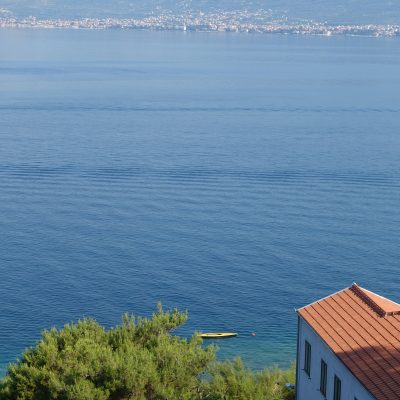 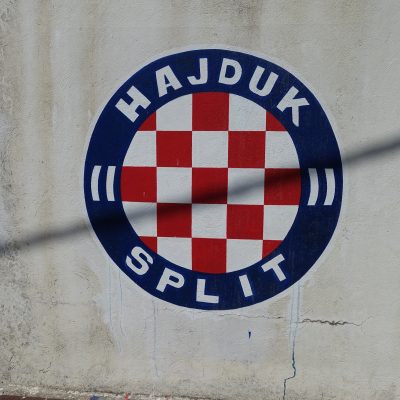 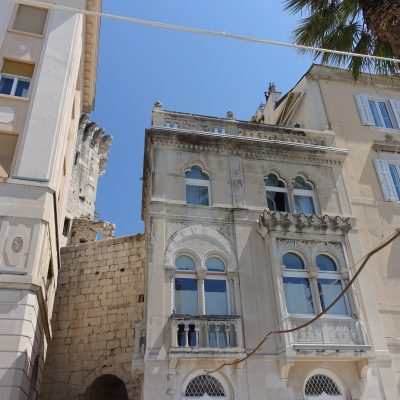 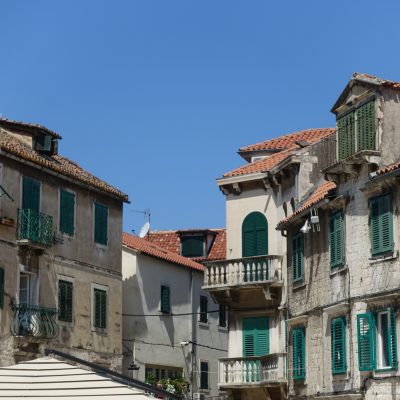 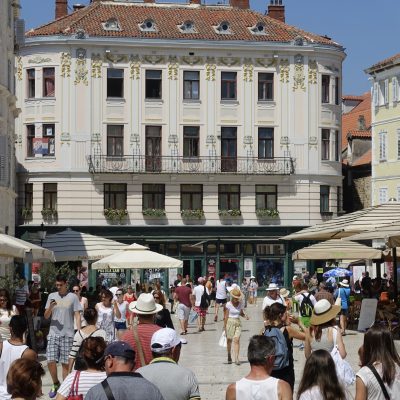 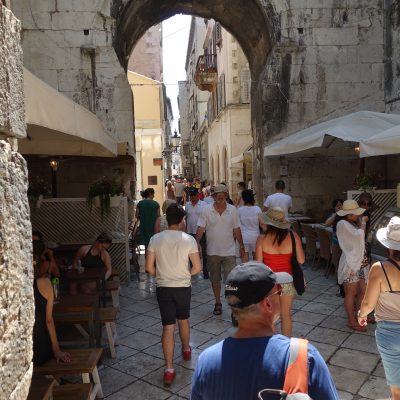 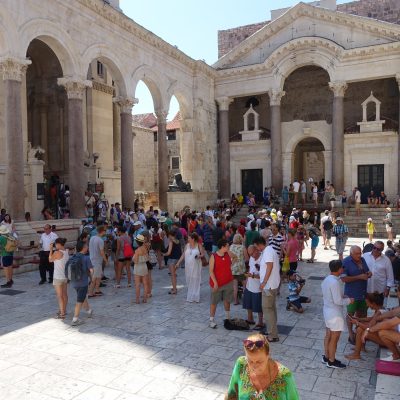 The early Christian and Greek past of Split 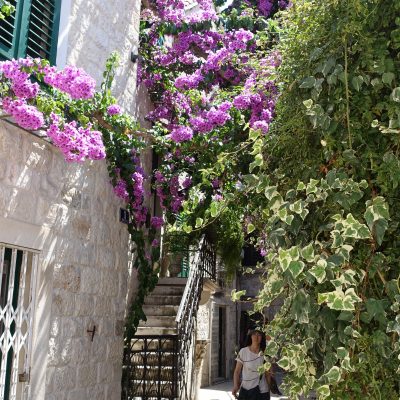 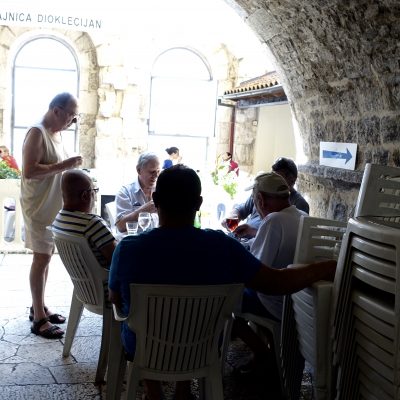 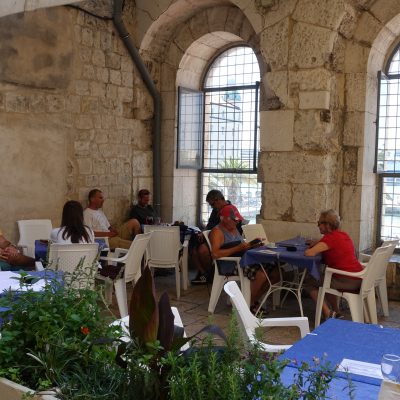 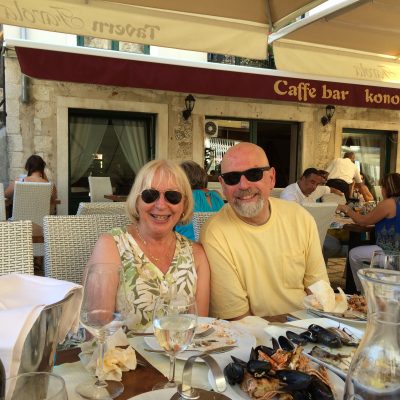 As an extra bonus we were able to listen to some a cappella singers perform traditional folk songs called Klapa inside the UNESCO World Heritage site of Diocletian’s Palace. The palace itself has been reworked over the centuries and consists today of an maze-like jumble of ancient through medieval architectural wonders.

As lovely as Split was, the most memorable part of our stay was our visit to the island of Hvar. Borna and his dad procured a motorboat and a life jacket for Teddy and we headed out across the pale teal waters to the scene of my traumatic episode of the mumps!. We wove through the many mountainous islands that dot the coast and eventually pulled into the port of the lovely village of Jelsa. 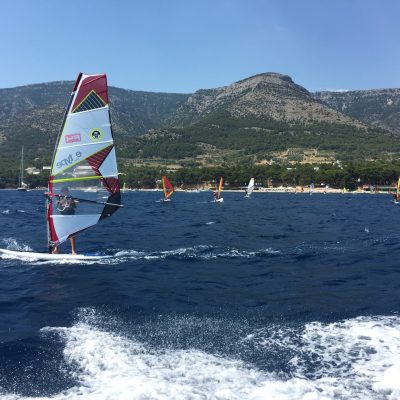 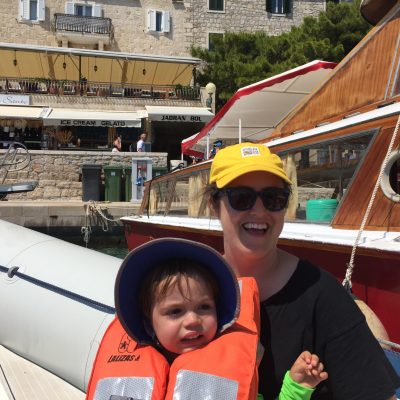 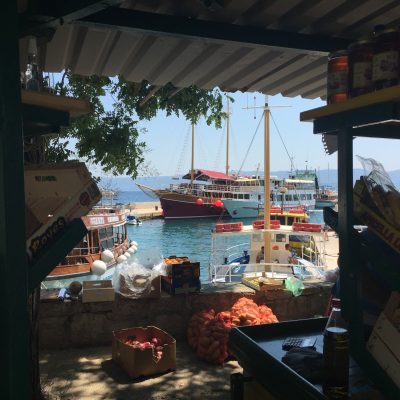 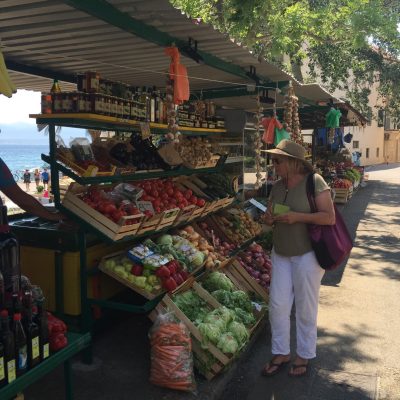 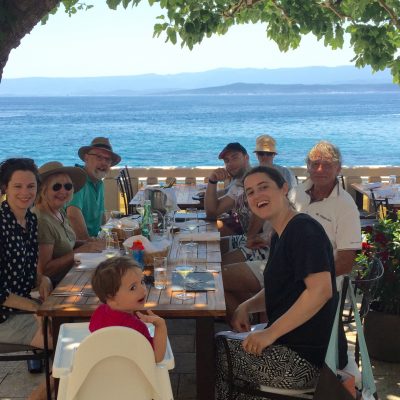 Lunch at a Taverna on Brac in the town of Bol 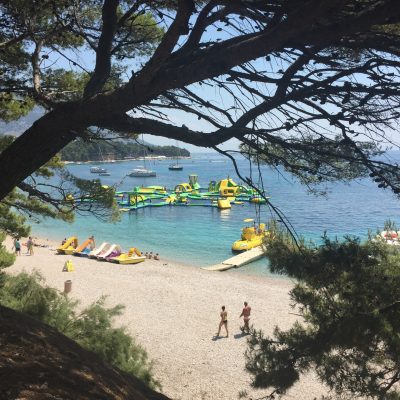 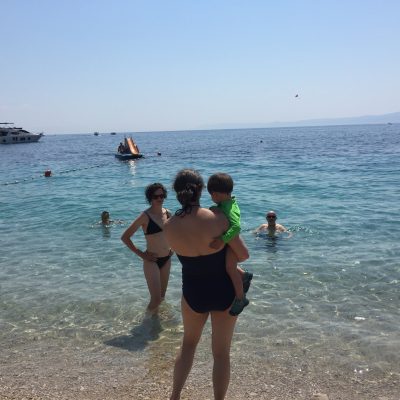 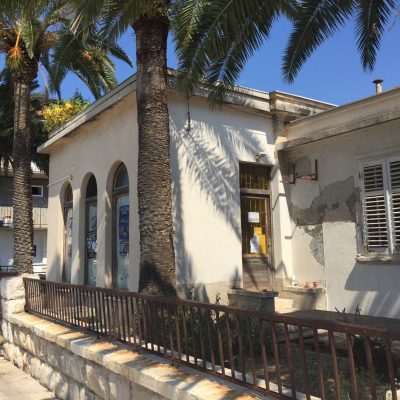 The former clinic where I had the mumps 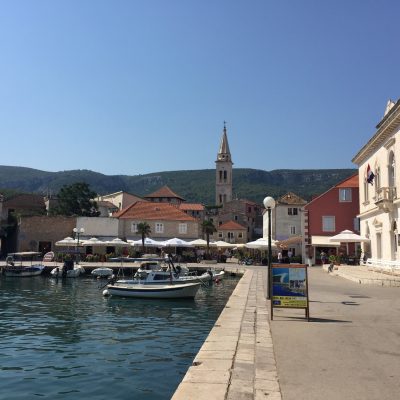 Jelsa on the island of Hvar 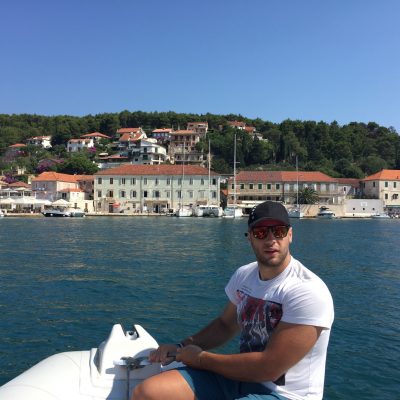 Borna at the helm 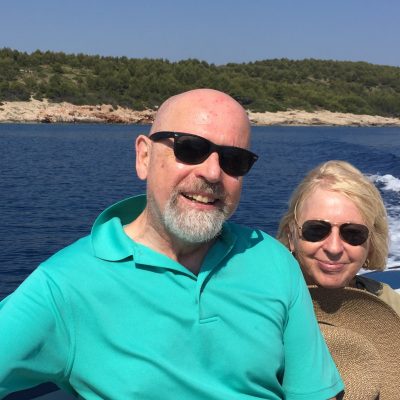