Sicily has the right to be the proud of its stunning collection of ancient Greek and Roman-Hellenistic temples dating from the 6th century before the Christian era. The settings are majestic, the artistry is admirable and the colossal dimensions are a wonder. It is so cool to be able to climb through many of them and imagine what it might have been like to live then. The Valley of the Temples outside of Agrigento is the most impressive, and that is why we decided to base ourselves nearby for a week. It is ranked as the number one site in Sicily. Our collection of favorite photos from the temples can be viewed here.

And we did know that a lot of the money that had come into Sicily when it became a member of the EU had been grossly mismanaged in Agrigento. There are miles of tall apartment building that were never completed and have no one living in them. But we did expect to find things in better shape along the coast and that is why we chose a beach town apartment for this part of the trip.

Well….all I can say about San Leone is that it has potential. Describing it as a rundown seaside resort with architecture stuck in the 1970s might be too kind. There seemed to be some nice homes locked behind walls and rusting gates, but the infrastructure was abysmal.  Google maps did a valiant job of getting us from point A to point B, but as often as not, the rutted one-lane roads ended in, well, they just ended. 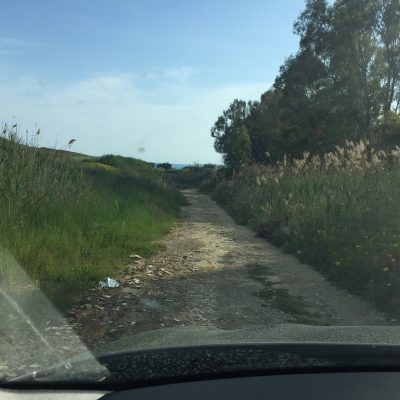 GPS brought us down this road

Our little apartment, which I had hoped would be quirky and cute, had no wifi and no heat (overnight temps in the 40s), no toaster, no microwave, no oven, and no coffee maker. We could walk neither to a food market nor a restaurant. The outdoor terrace and pergola might have been passable if it hadn’t been too cold in the evening to sit outside, and there was nowhere to sit inside except the kitchen table with a bare lightbulb hanging overhead.

We have camped in the rain, we have stayed in some scary hostels and some seedy hotels but this was pretty awful, and we finally had to admit defeat. We had planned to go on a day trip to Palermo by train, but as we became more and more uneasy about leaving our car in any parking lot in Agrigento, it was clear we needed plan B. Thank goodness, our cell service was functional! I realized that we could get to Cefalu, stay in a 4-star hotel in the town for only about $20.00 more than we were paying for what has become known as “the hell hole.” Phew! We had a gorgeous ride through the mountains, stopped for lunch in a hillside town topped with a castle and arrived successfully in Cefalù in time for a Spritz Aperol as the sun set in a much, much, much prettier town! And we did get to Palermo by train, which was easy. Photos from Cefalu and Palermo are here

I should also add that during this stressful three day stretch we lost Ray’s sunglasses once, his phone almost got left it the men’s room of a restaurant, and I did leave my phone on the steps of the Basilica in Sciacca (it was closed) when I switched cameras, but Find my iPhone discovered it still there one hour and 15 flights of stairs later. And then a happy landing in Cefalù, which was much more the kind of place I expected to find in beautiful Sicily!

The next post will maybe help you not make all the same mistakes that we made!