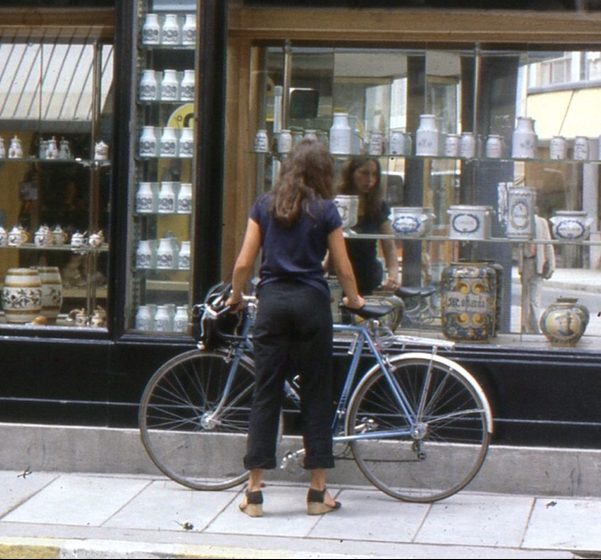 Me and my Motobecane in Dijon, 1979, after 6 weeks of cycling around France. 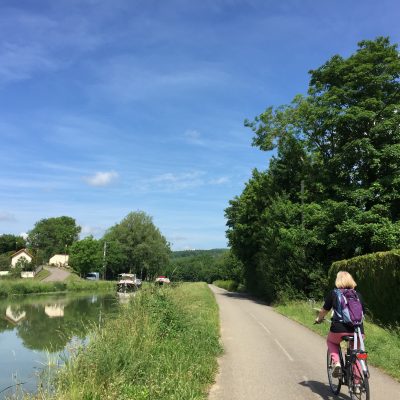 Riding along the canal, I don”t quite look like I did at age 29, but my spirit is unchanged. Actually, I think I may be bolder than I was then.

The last time we were in Dijon was in 1979! Since then, we have often read what a great place it is, and seriously considered it for a longterm stay. Problem is we are such gypsies, and when it came down to it we couldn’t see ourselves staying anywhere for too long! We are beginning to reconsider now that we are getting this wanderlust out of our systems (maybe)! Dijon is a beautiful city with animated pedestrian streets, leafy green spaces and fountain filled squares. There are tons of restaurants, nice-looking shops and great art and music. It is within easy reach by train to all of France (including our beloved Luberon) and most of Europe. The bike trail along the Canal de Bourgogne goes for miles and miles and is gorgeous. And of course, there is the wine! So if Margaret will let us out of the country again, we may be back.

Of course nothing is perfect, and we keep telling ourselves that the challenges we sometimes face are keeping us young and adventurous. They certainly keep things interesting, and probably some people will be relieved to know that we aren’t always so damned lucky.

After having dusted off my “Chez le Coiffeur” vocabulary in Besançon, it was time for “A l’hôpital!” in Dijon. Ray and I were having a splendid ride along the canal on a crystal clear day and were just heading back to Dijon for lunch. I thought Ray had fallen behind me, but in reality he was next to me in the deep shadows. He warned me that I was too close to him, but too late! My bike hit his back tire and I went flying into the bushes (better than into the canal I guess) and landed hard on my back. It really hurt, but I was probably more scared than anything. At my age with my skeletal system beginning to wear down any fall could result in broken bones and I was instantly envisioning an aborted trip, paralysis, death! Well, some super friendly French people showed up immediately and took over. The ambulance was called, I was not allowed to move, a nice lady calmly untangled the branches around my head and soon the “pompiers” arrived and put me on a “coquille” and then carried me to the ambulance. They gave me a teddy bear called “Pompy” and chatted away to me on the long drive to the hospital. 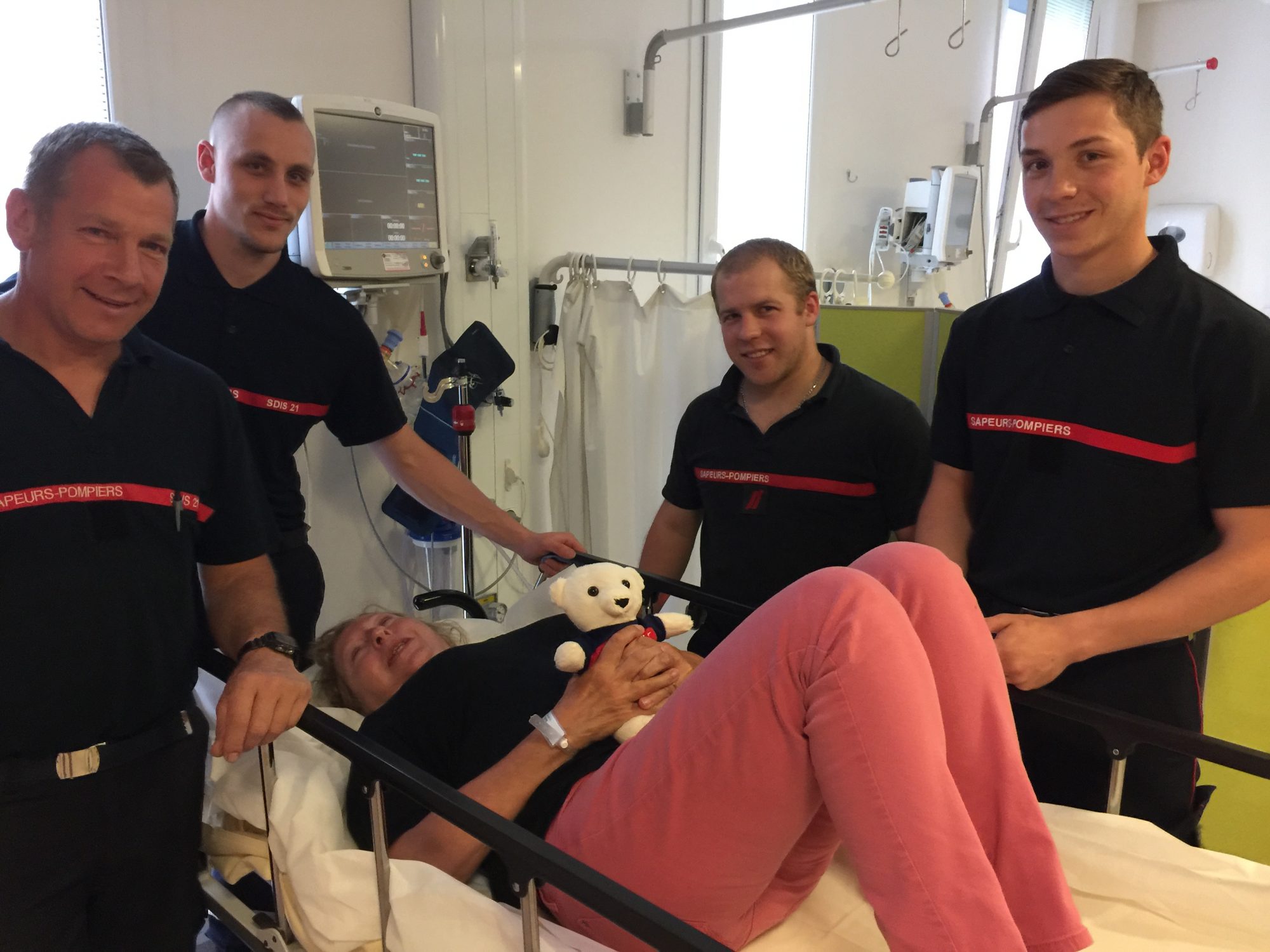 The “pompiers” who came to my rescue posed for Ray.

Being wheeled in without being able to see anything but the ceiling was a bizarre experience! There was no long wait in a corridor. There were no screaming children or cops bringing in criminals. I was asked many, many questions by many, many people. No one believed my date of birth (Ça ne se voit pas, they said!) After the fourth round of questions about whether I had “fourmis” in my feet or hands (no), whether I had hit my head (no) I was asked to sit up (ow!!!!), and then walk, and then bend over. All painful, but possible. They decided they didn’t need to “passer une radio” because they didn’t want to subject me to x-rays for no real cause. They sent me on my way (nice cab driver drove Ray to the hotel for my passport, then back to the hospital, then back to the hotel). Two prescriptions cost 8 euros. The rest? Nothing as far as we know. We were asked to leave an email address so they could bill us, but they were pretty nonchalant about it. My last French hospital experience included two emergency rooms, a lot of stitches and one follow-up visit and cost $150.

The aftermath? I was in a lot of pain yesterday and could barely move. I thought I might be horizontal for a week. But today I was able to get up and we even drove to the beautiful town of Vezelay to see one of the most amazing Romanesque churches in the world and to have a birthday lunch for Ray. Now we are settling into a beautiful cottage just outside of Beaune, where we will be for five days. Hopefully back in the saddle in another two!