Ray began his love affair with Montreal in 1968 when international travel and cheap beer were a novelty for him. I didn’t get there until I was a TA doing my master’s in French language and literature at UCONN. I loved it slightly less than he did, perhaps because at the time Québec City was so much more charming, less gritty and less touristy than it is now. Or maybe it was the weather. Weather, in fact, can be an issue for those determined to walk miles and miles on pavement. Once we traipsed through slush over our ankles when we had hoped to be snow shoeing. Once it was so insufferably hot we could barely walk a few blocks at a time and definitely couldn’t enjoy the cuisine for which this great city is famous. Oh and then there’s the numbingly cold dark days of winter. But when there is a nip of autumn in the air and no precipitation in sight, it is nothing short of magical.

Montreal is the second-largest primarily French-speaking city in the world. Bet you didn’t know that! So to my delight, French, in a wide range of accents, can be heard floating through the air at every turn. That said, most inhabitants move easily from French to English and frequently do, even among themselves and in mid sentence. In recent years there has been a huge uptick in immigrants from France seeking more job opportunities without giving up their language or great health care. This means that if your French is more Parisian than Québecois, you are rarely misunderstood, and even less often ridiculed. Or maybe that’s because I am now a sweet little old lady–all forgiven. As a linguist I find it fascinating!

And yet for us, as we flit around the world seeking new thrills and making sure we don’t miss anything before we are too old to move, Montreal suffers a bit from being “always there”.  But when a family wedding in northern Vermont brought us within a few miles of the border, my Marriott account was overflowing with reward points, the weather gods were smiling and our Montrealer friend (aka former student) Maggie was available, we did not hesitate. On a sparkling autumn day we flew up through the backroads across golden farm lands,  by silver-spired churches, and across the breath-taking Champlain Bridge to our destination. Our GPS led us flawlessly to the downtown Courtyard and we were soon parked and ready for lunch. We headed straight to the Bistro T just up the road where we sat in the sun, watched the kids frolic in the fountains and sipped our Muscadet. 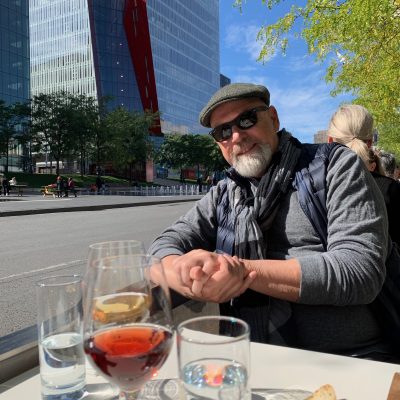 Sadly, the food did not live up to our memories of the place, but the location and atmosphere did. We were pretty content as we headed out on our walk across town to meet Maggie at Atwater Market.

We probably should have rented bikes as we had intended, but I was still too tired from three weeks of weddings to deal with the logistics. Walking seemed simpler. We liked getting away from the glass skyscrapers that dominate downtown through neighborhoods clearly in the process of gentrification. 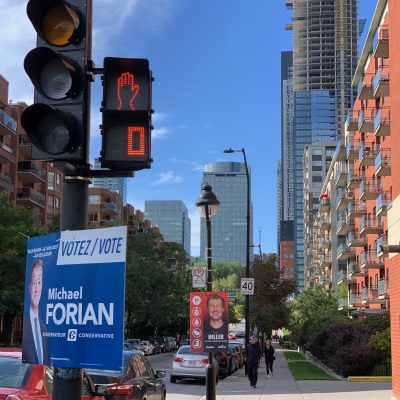 Heading down Notre Dame Ouest toward Atwater we passed cool cafés and terraced restaurants interspersed with sixties era concrete monoliths, recently restored wood frame houses and new neighborhoods of gardened condos. The market itself was packed with gorgeous produce and stands selling maple products and local jams and chutneys. Butchers, delis, cheese shops and bakeries lined the sides. Crowds swarmed through and salsa music wafted through the air. It was a glorious afternoon to be out and about, capped by apéros at Maggie’s and then pizza at Elena (cafépizzavin).

The weather the next day was not quite so glorious, but still cool and dry and a good night’s sleep had us soon off to explore Vieux Montreal. The cobblestone streets were in the process of being repaved with flatter and evener, but just a beautiful, granite bricks. The stark grayness of the stone buildings was softened by the colorful displays and abundant international flags. Because this is where most of the tourists end up, we were unsure about finding a decent restaurant and one not featuring a caricature of Québecois cuisine. We landed at a fairly unlikely spot – right on Place Jacques Cartier in tourist central!  Maggie Oakes  offers a $22 (Canadian) two course prix fixe menu in a dining room that managed to be both large and intimate at the same time. The menu featured locally sourced seasonal options, the wine selection was stellar and the service was fantastic. I suspect that dinner or veering off the lunch prix fixe menu would be considerably more expensive. 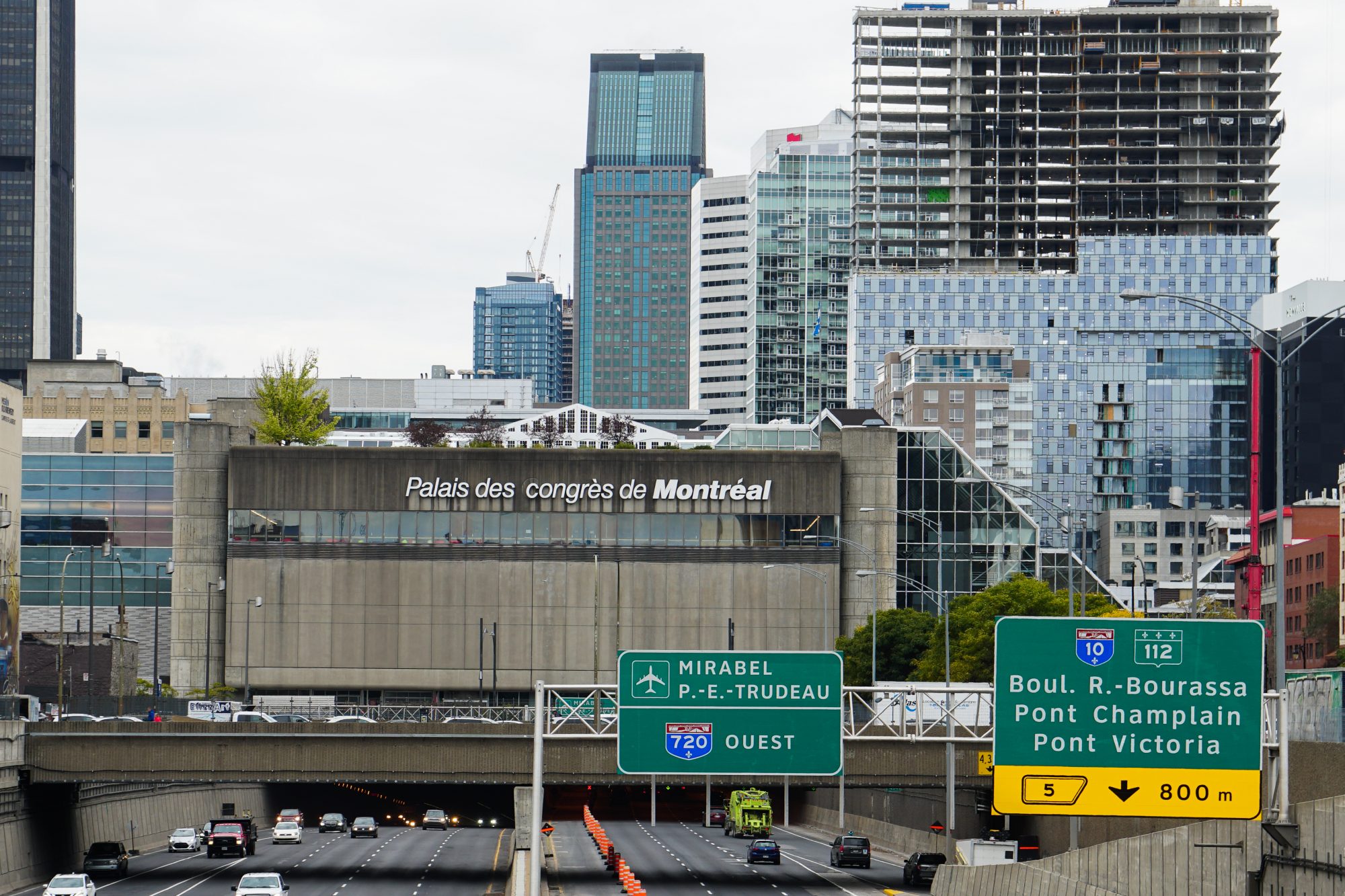 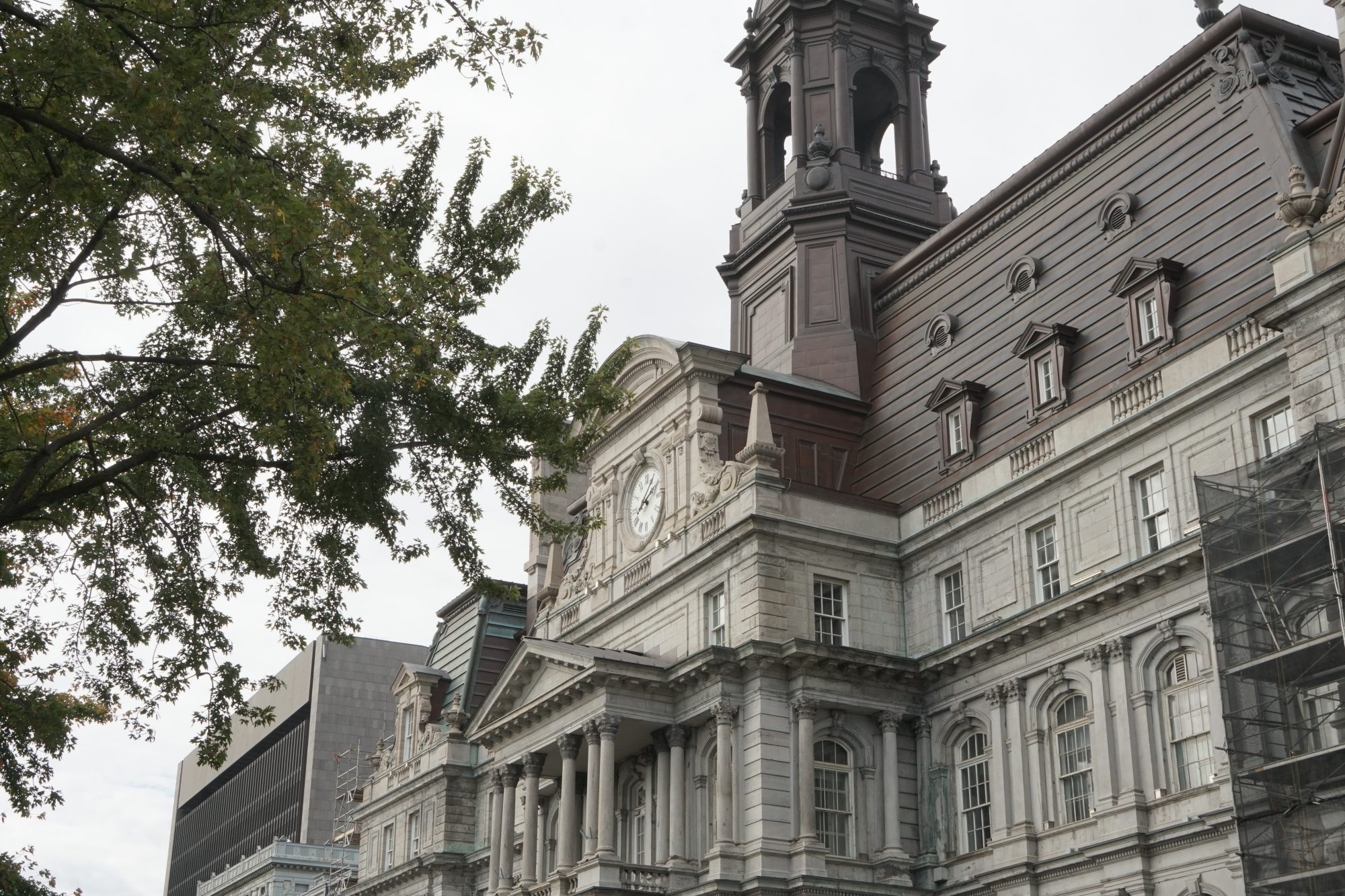 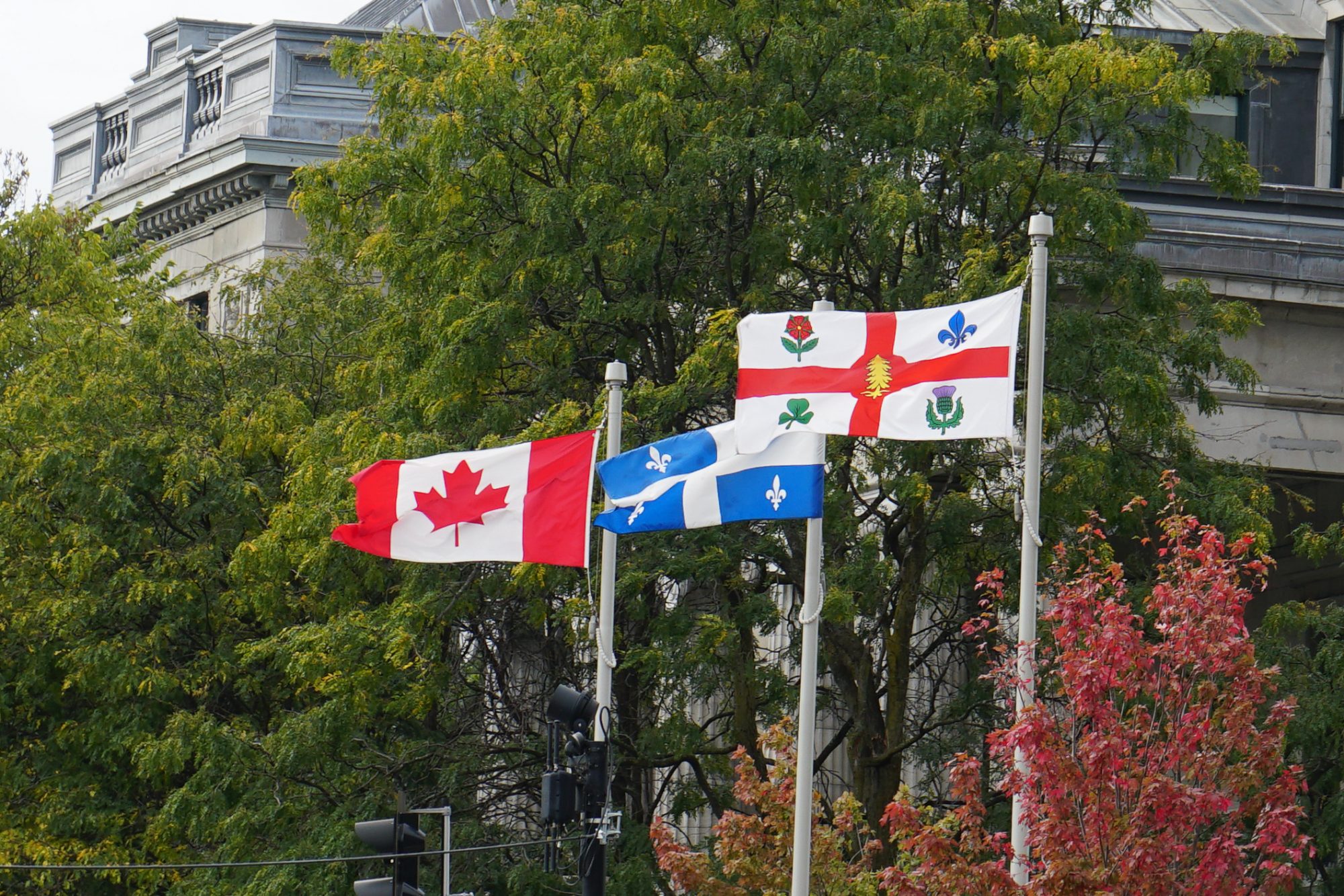 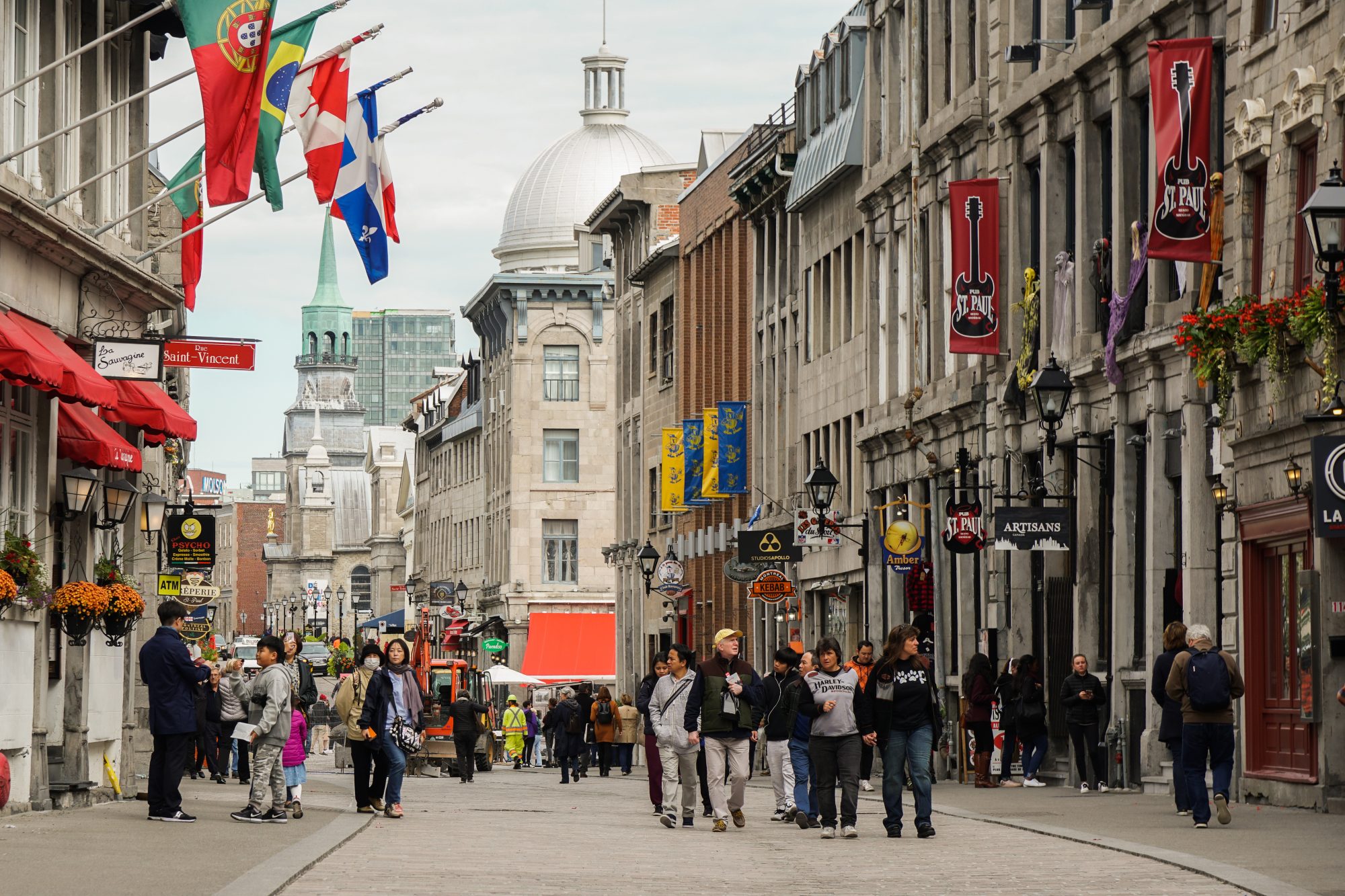 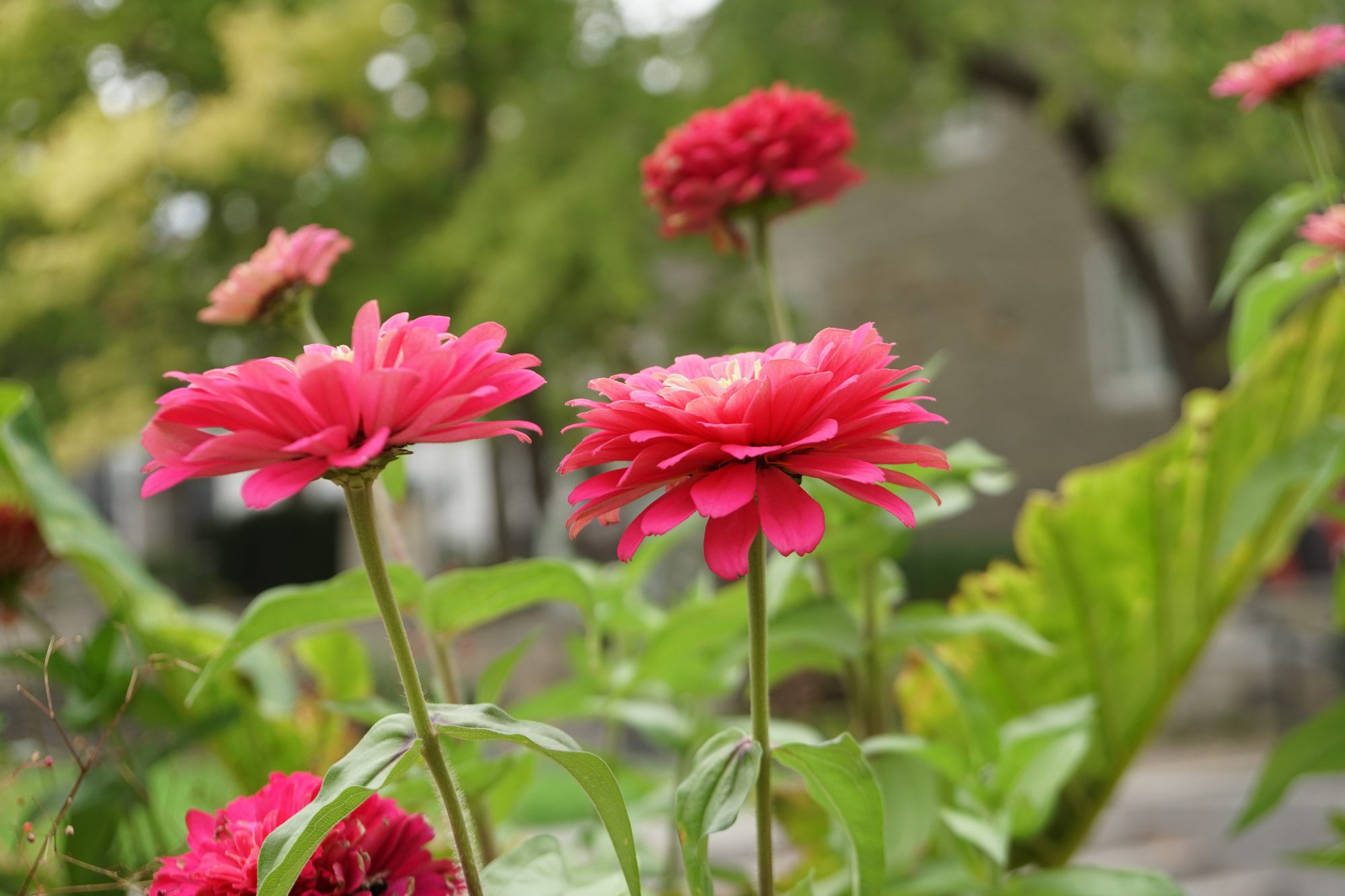 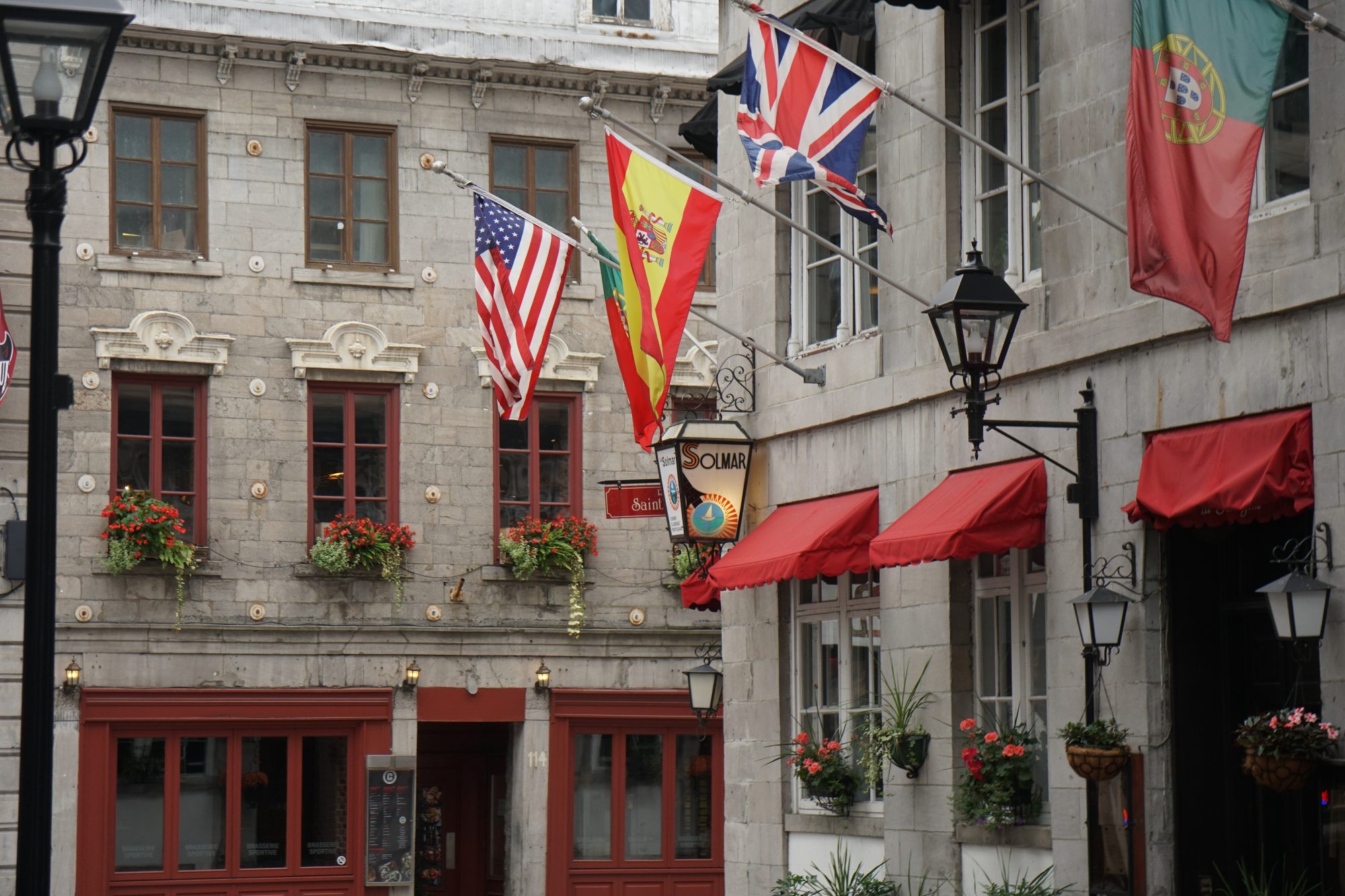 After a brief after lunch rest, we headed out again on foot, this time through the McGill campus and then weaving our way through the vibrant Plateau district. Street art, ethnic restaurants, elegant boutiques, antique stores, cool bars and cafés make this an urban hiker’s paradise. Poignant references to favorite son Leonard Cohen adorned the walls and shops.

Our destination (we actually had one!) was dinner at Buvette Chez Simone and it was a delight! We were determined to try the touted poulet rôti, which was indeed excellent (cool that you could order 1/4, 1/2 or whole) but honestly we could have stopped with the charcuterie & fromage board. With the provided pencil you circle your selections of meats and cheeses and the kitchen creates a board for you with suitable additions. The wine list even surpassed Ray’s expectations! Since it was a lovely evening we decided to forego the Uber ride back to the hotel and walked the final 1.5 miles rounding off our miles walked for the day at about 10. As a special additional treat we passed the very bar that Ray used to frequent when he was still a teen-ager! 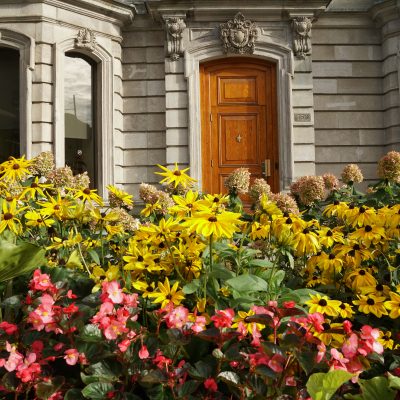 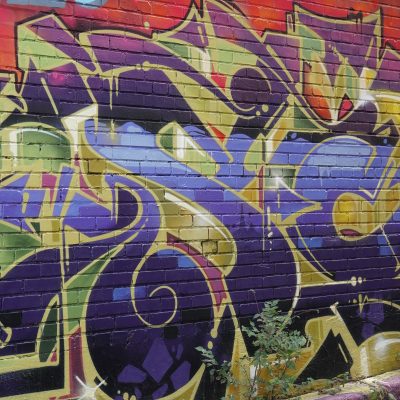 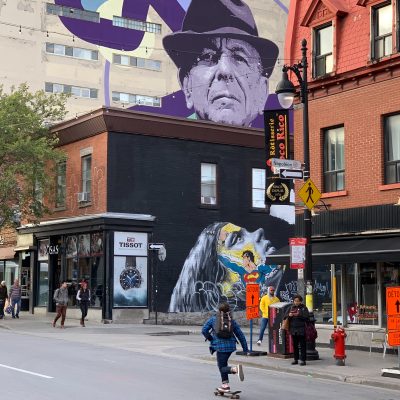 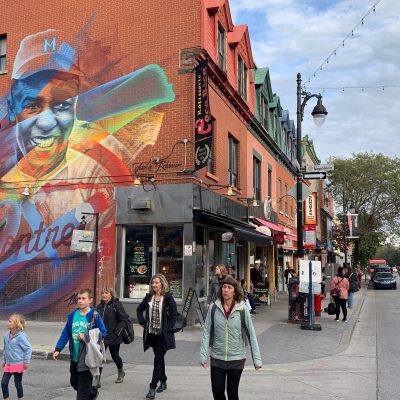 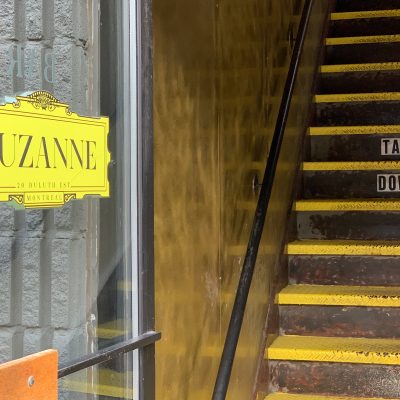 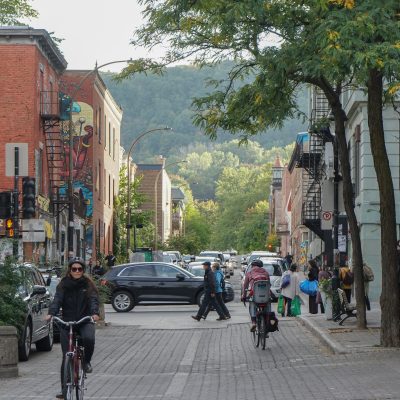 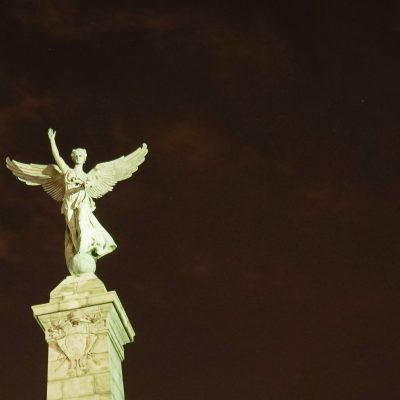 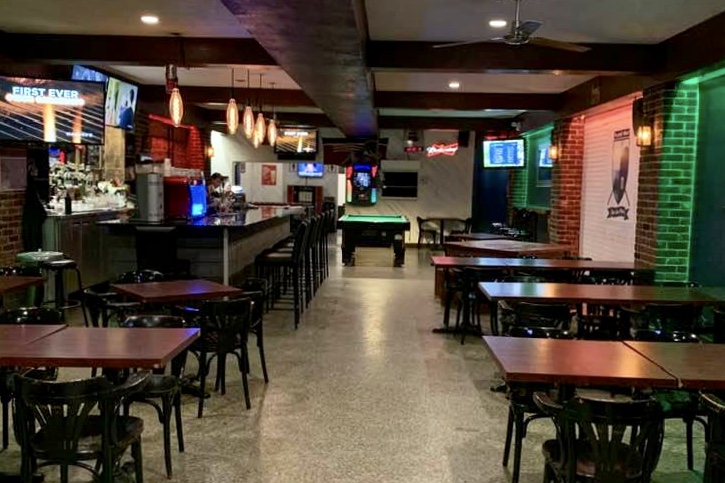 The next morning, as we wove our way through the city we found one last homage to LC and stopped at Atwater Market for an amazing selection of cheeses to bring home. We already can’t wait to return!