Christmas is admittedly a family holiday. However, now that we have grown children with families of their own, it sometimes occurs that our kids need to be with the families of their spouses on the west coast. It’s only fair. But it is kind of a bummer. This year, rather than staying home and moping, or trying to pretend we’re having fun, we decided to run away! Our destination for a merry Christmas? Scotland! Mostly.

Although my dad was born in Glasgow and I have actual, real-live Scottish cousins, we have not spent a ton of time there. Only twice before now, in fact. The first when we were barely twenty-two, dirt poor, and well, clueless, and the second two and a half years ago when we were traveling with our daughter’s family, which included a toddler and a very pregnant mom. That was great fun but we never quite made it to Edinburgh, and we hadn’t given Glasgow its due either. So, after some research on the best way to proceed, we opted to fly direct to London, spend a couple of nights at our beloved St. Ermin’s hotel, and then take the train to Edinburgh. From there we would get ourselves to Glasgow, and then back down to London before flying home. Having a rough plan in mind we booked flights and then started to flesh out the details. We wanted a mix of hotels and apartments, social time and alone time, guided adventures and solo traipsing around.

First we let our friends and relatives know we would be in town and came up with an invitation to Christmas Eve with a long lost cousin and his family in Edinburgh, lunch with an older cousin and her husband in Glasgow, and dinner in London with some young English friends. We also had to strategize the transportation plans. We unanimously decided NOT to drive–even though we love road trips. This was partly because of the stress of driving on the left, partly because it is winter, which means very few daylight hours (bad for aging eyes) and partly because we would be in cities so public transportation made more sense. Plus we love trains! So with my Trainline app newly updated I started booking trains. It turns out that you really can’t do this until 90 days before in the UK. However, you can set up the app to alert you when it’s time to reserve. 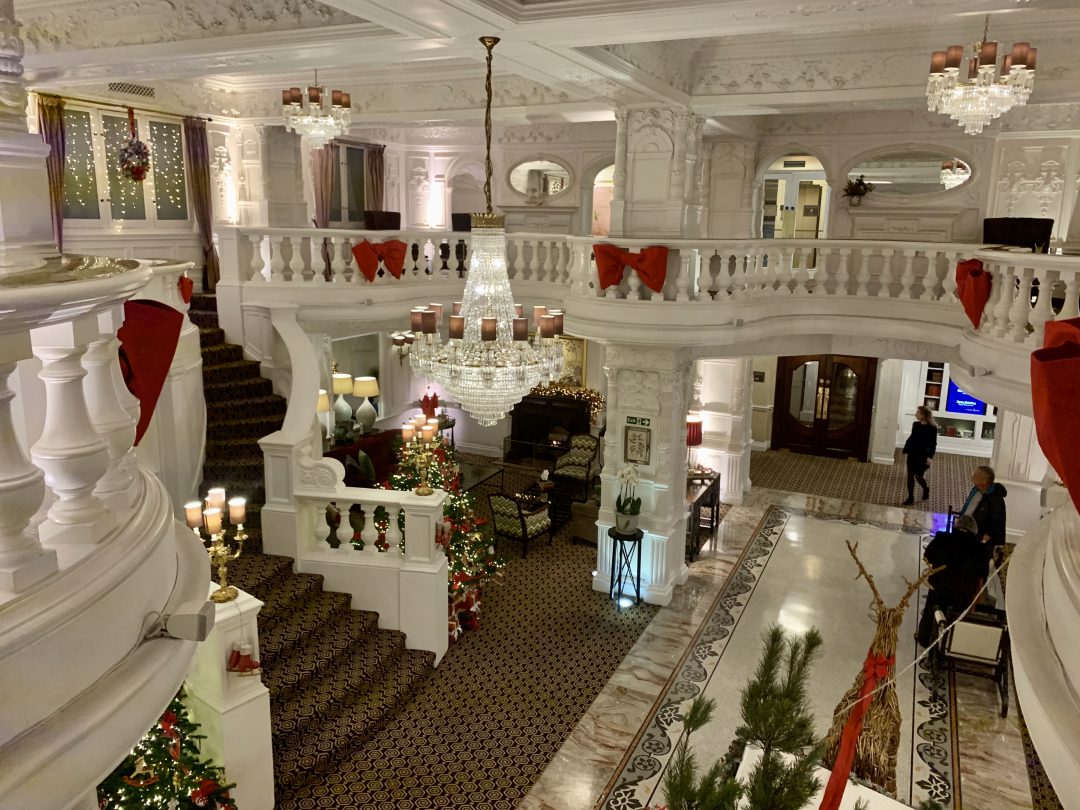 The lobby at St Ermin’s

We took a direct daytime flight on British Air from Boston. After 50 years of international travel it was the first time we had flown during the day and it was pretty great–we arrived in time to grab a late pub dinner and felt almost no jet lag the following day. As we’ve done before, we stayed at St Ermin’s whose fascinating history and whimsical decor make it a compelling destination. It is also within walking distance of many major attractions including Westminster Abbey, Big Ben, Covent Garden and Trafalgar Square. It is not cheap, but it is a member of the Marriott Autograph Collection, so my reward points keep adding up.

Our first morning after a sumptuous breakfast at St Ermin’s (we had it for free because they don’t have a rewards club!) we set out on a holiday walk to Covent Garden where we had a fabulous meal at Frenchie on Henrietta Lane and talked at length with the lovely sommelier, Julia. Once again we noted that hardly anyone in the hotel and restaurant industry in the UK is British. In fact, Ed, the bar tender at Frenchie, was possibly the only one!

Our evening entertainment was a glorious Christmas Light bus tour atop an iconic double decker. A little chilly by the end but worth it!

We tried to find a spot for dinner on the walk back to St Ermin’s but ended up having dinner at the hotel. We don’t normally think of hotels as having great restaurants, but it is becoming more and more common. Ray had a white truffle risotto and I had delicious organic Welsh salt marsh lamb cutlets. Then the next morning we headed to King’s Cross Station to board a train to Edinburgh!

Trains in the UK are better than those in the US–there are more of them, they are more comfortable, and although not exactly cheaper, there are deals to be had. If you attempt this, read as much as you can before hand and consider rail card options (there is a senior rail card that gives you 30% off most tickets. off most tickets.I am used to the French system so there was a bit of a culture shock as we tried to figure out why we didn’t have reserved tickets to Edinburgh but did from Glasgow and how to get safely into the train, stow our luggage and find seats. The trick here is to arrive early and be the first to the platform when the track is announced. There is an icon on the electronic schedule that shows which cars have the fewest unreserved seats (there are always some). There are also different train routes. The fastest one (which we did not end up taking) goes over a beautiful bridge and up the coast. Easy to miss the beauty in the winter when there are so few daylight hours, but it’s certainly worth a thought!</span> 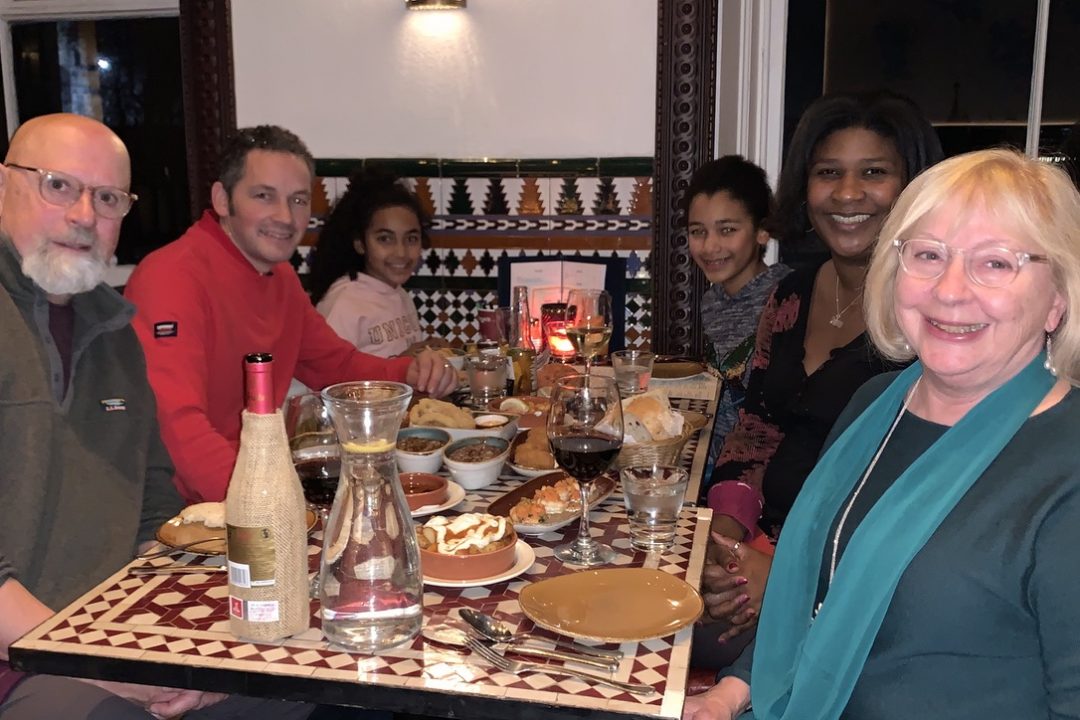 Dinner in Edinburgh with Scottish cousins

We took a taxi to our Airbnb flat which was on the Royal Mile. It was a fantastic flat in a perfect location between St Giles and the castle and just around the corner from the famous Harry Potter street (aka Victoria Street). It was well  worth the extra few dollars it might have cost. However, it was not for anyone who might be stairs adverse. 55 steps up. And down. Every time. We were fine with that but it did make running down to our Sainsbury Local when we discovered there was no pepper in the pantry a little off-putting.

Both the Castle and the Queen’s Palace were closed when we were there so I can’t report on them, but they are both highly instagram-able. There is also a huge Christmas Market. Unless you are dying for a bratwurst, I do not recommend it. If you want Bavarian, go to Bavaria!

I belong to Glasgow!

We had to go back to Glasgow. I mean, my dad was born there and I still have cousins nearby. And even though we did take a family trip to Glasgow in 2017, we really thought we needed another visit. Fun fact! Many rail lines in the UK get their annual maintenance check during Christmas week! Trains from Edinburgh to Glasgow were cancelled!! So we took the bus. It was comfortable and easy, even though the bus terminal was not as near to the train station as advertised. This was important because we were staying at the hotel IN the train station. Well we got that sorted, and found our way to the Glasgow Central Hotel– a 19th century charmer. The grand old dame of a hotel was showing some signs of wear and it was well, dark! But the champagne bar was lively and fun, the staff was friendly and helpful, and the location was great for traipsing around the downtown area and for taking our final train back down to London. Only problem, the coolest restaurants are out near the university. We kind of did know that. Never mind, it was great. We had one lunch with more cousins, tea at the Willow Tea Room, one fabulous dinner at the Ubiquitous Chip in Ashton Lane and a good one at  La Lanterna, an old-fashioned Italian restaurant right near our hotel.

The highlight of our stay, however, was another Rabbie’s day trip. It did turn out to be a good call to book these little trips in mini-vans with a local guide. It is not expensive, the groups are small but you are not compelled to chat with strangers–there is plenty of time to explore on your own. At our advancing years it has become too stressful to drive in the UK, especially with so few hours of daylight, but we didn’t really want to be committed to only visiting large cities either. This trip took us to Stirling Castle, THE castle to see if only one can be squeezed in. It was beautiful and we learned a ton of history–all of it now stored in my husband’s brain. We then wound our way through fields of Highland Cows (“coos”) along the banks of bonnie Loch Lomond and to a whiskey tasting at the Glengoyne Distillery. Glengoyne is now my favorite Scotch-smooth and fruity!

Staying at the Grand Central Hotel was super-convenient for hopping on the train to London. With our tickets on our phones, we just scanned them and hopped on board. In no time we were back in London. We stayed at a different hotel this time because we only had one night and we wanted to be near the action. We stayed at the ultra modern W hotel in Leicester Square–right near Chinatown and close to Covent Garden. Our friends, Emma and Gareth found us and led us through Covent Garden for photos and mulled wine (the omnipresent UK wintertime quaff) and across the Thames to an amazing butchery turned high-end restaurant unlike anything we had ever experienced! Great steak, great wine and fabulous conversation with friends!

Back home to ring in the New Year but already can’t wait to go back!