Many, many people had told us how much they loved Hanoi. That was surprising to us, since in our youth it was depicted as an evil place. We were nevertheless intrigued. It was also the launching spot for a short cruise into the oft photographed Halong Bay, so it was the starting line for our ten days in Vietnam.

Our flight from Bangkok was easy, we sped easily through customs (yes, we got online visas ahead of time and that did help) and found our new guide, Tony, with no problem. Quickly we were on our way to our new hotel, the Hanoi Hilton Opera (not to be confused with the historical and satirically named Hanoi Hilton.) Conveniently located near the old town and the Hoan Klem Lake, it was elegant and luxurious. Once again, dinner at the hotel seemed a good idea since it was late and we were tired. There is only so much adventure an older person can take! 🙂 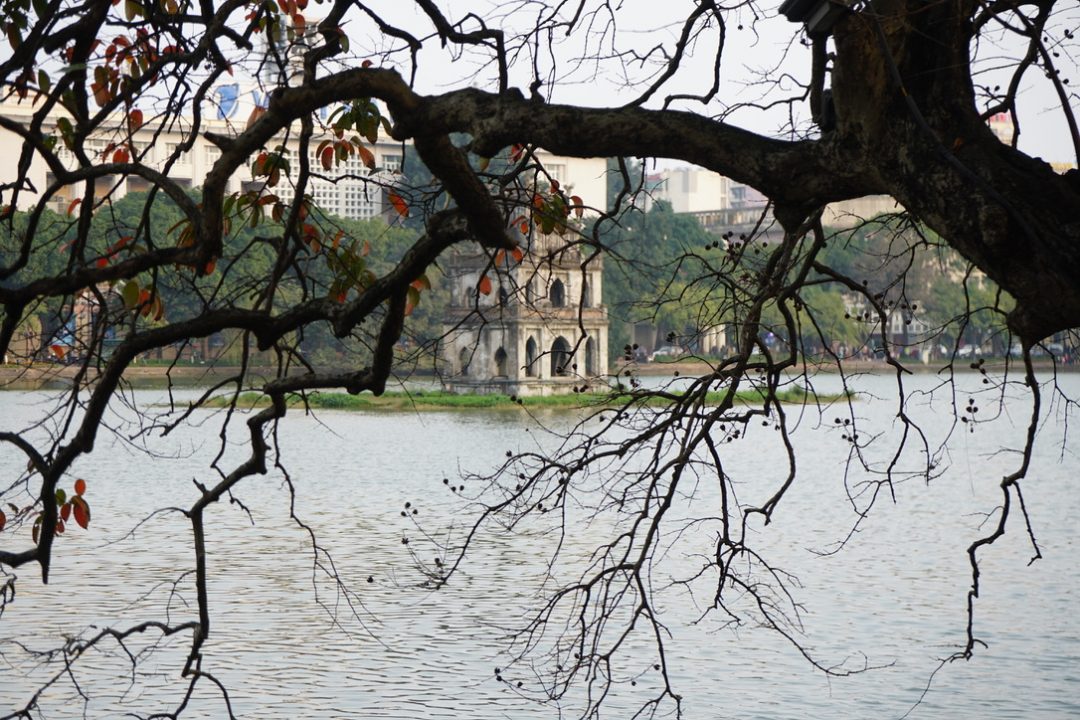 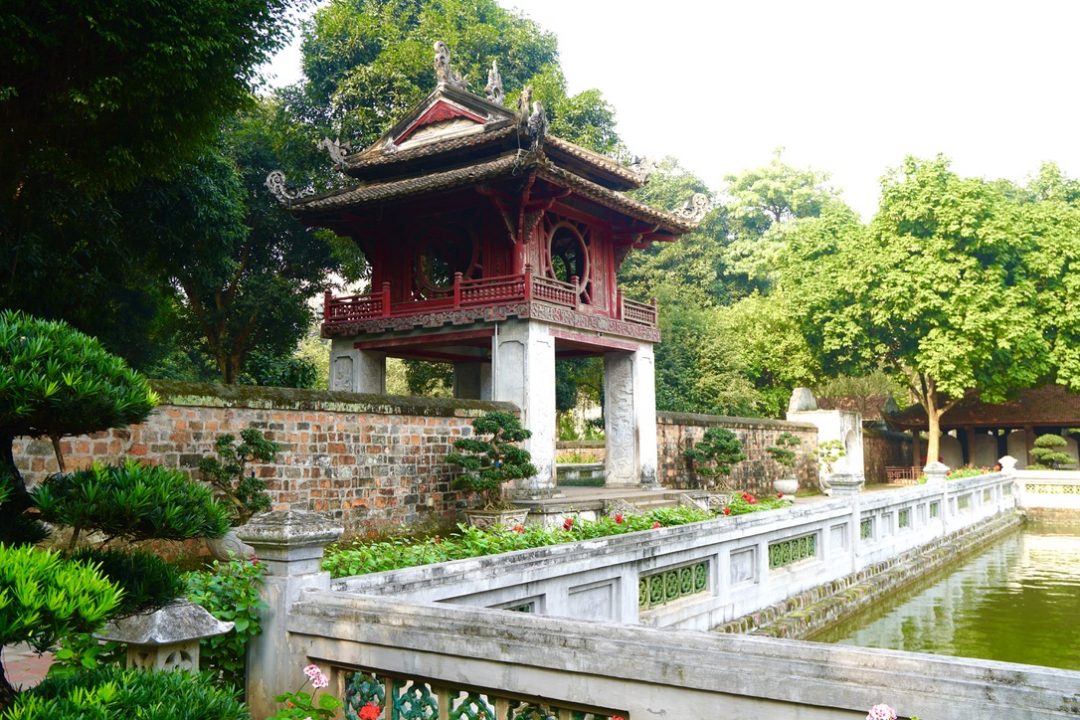 The leafy, broad avenues of Hanoi reminded us so much of France. Some southern city we had never seen? Somewhere southeast of Marseille? We admired the effortless way in which motorists, motor cyclists, cyclists and pedestrians seem to glide amongst each other in a synchronized ballet whose steps were mysterious to us. We took to it immediately, and Tony made sure we saw as much as possible. Skipping the Ho Chi Minh Mausoleum (seemed only right since I have never been inside Les Invalides to pay homage to Napoleon), we ambled, a bit dazed, through the Temple of Literature trying to soak up this new environment. 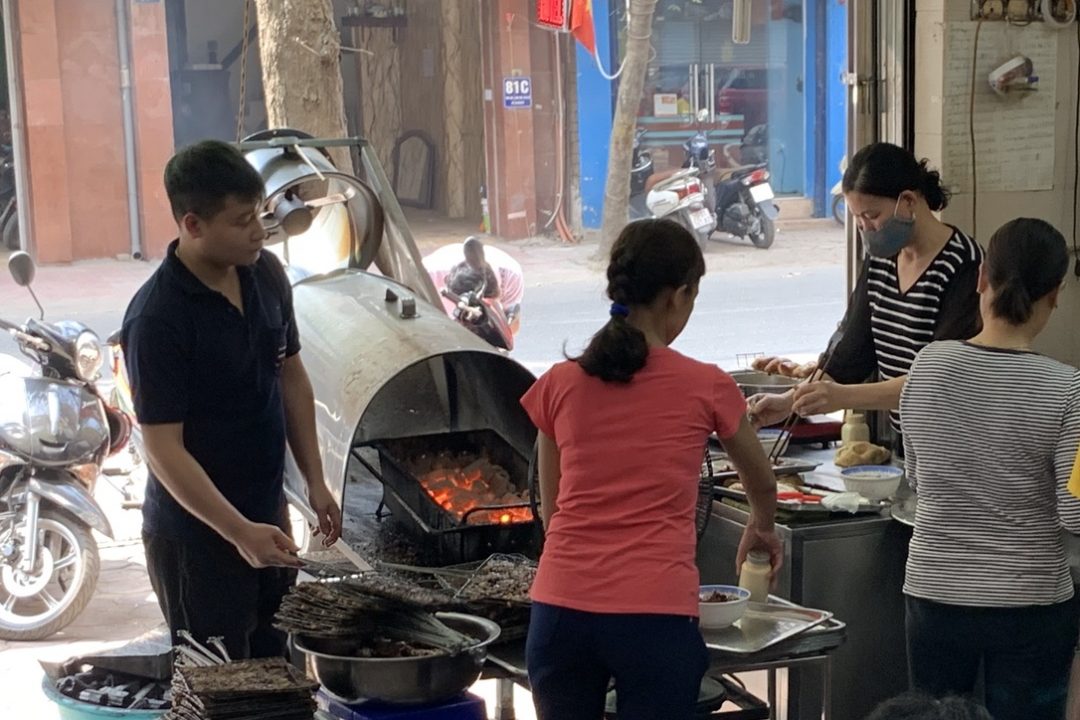 For lunch, Tony  brought us to a local spot for our first Bun Cha. Pork was grilled on an open charcoal barbecue and served with noodles in a fragrant broth and piled high with fresh herbs. We were instructed to add spicy fish sauce (not the stuff in bottles) to our liking. Thin slices of red chili peppers floated in a straw-colored and garlic-laden sauce and it quickly became a staple at all our Vietnamese meals.

But there was little time to dawdle here! We were allowed some time to rest at the hotel (Ray went out for a coffee break) before the evening’s adventures. First there was a thrilling rickshaw ride through the old town and along the beautiful lake. Hanoi was not nearly as hot as Bangkok, and everyone was out strolling through the park and stopping for ice cream or beers. Next was a traditional water puppet show, which was touristy but definitely fun, and then we were dropped off at a boutique hotel with a roof top bar owned by one of Tony’s friends. We had a delicious dinner there, admiring the view and enjoying beautiful evening. We had to figure out how to get back to our hotel by ourselves, but the people at the restaurant called for a private car for us. I’m sure a cab could have been found, or we could have walked, but it was worth it for us to spend a few extra dollars to get back safely and stress-free. Our younger selves would have walked! Our younger selves would probably also have had a few more drinks!

The next morning dawned gray and cool. We were already headed out of Hanoi. Far too soon!! But this was probably our one and only trip to Southeast Asia and there was much to see. And I was excited because we were headed to Halong Bay, a huge draw for me. Ever since our dreamy voyage up the Nile on the Dahabiya Dream, small (very small) old-fashioned vessels have an overwhelming romantic appeal to me. Ray is a little perplexed by this, since I am usually a person who cannot sit still. I have to be doing, doing, doing. But on one of these wooden ships with gleaming upper decks and magnificent views I can be absolutely still–gin and tonic in hand. 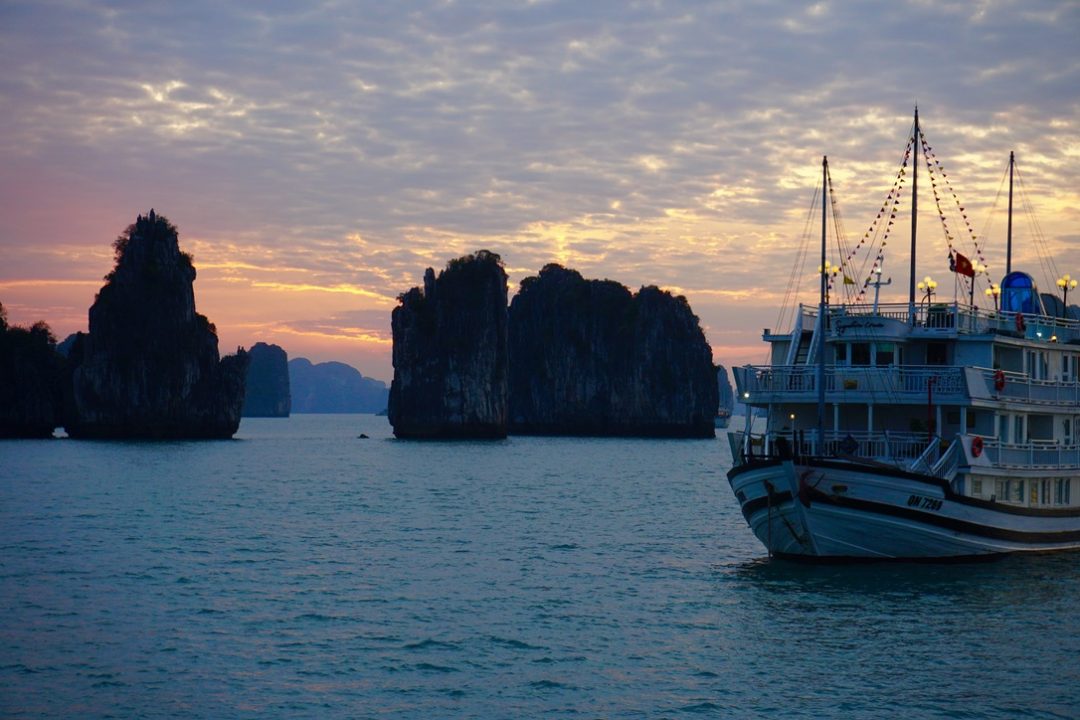 So we arrived at the port and were greeted by our steward (is that the word?), Tim,  presented with hand cleansers and requested to fill out a form promising that we had not been to China, that we did not have a cough, or a fever, etc. Temperature wands were waved at us. Tim cheerfully told us to just check “no, no, no”. Our bags were whisked away and we were led to our spacious rooms with individual little balconies. We had a delicious welcome lunch and soon the sun was out and we were cruising along the beautiful island-studded bay. We went out on small boats (the younger guests went out on kayaks) and watched fishermen and other small boats glide by. As the sun set brilliantly in the west, we were treated to a lesson on the art of making fried spring rolls (yummy) and enjoyed a delicious dinner with our new friend Monique from Oregon. The following morning we headed back to the mainland, then to the airport and from there a short flight to Danang.