Hoi An and Hué

Danang is a sparkling new university town and its airport is just about 30 minutes from the tourist mecca of Hoi An. Leaving the airport with our new guide Hoanh, we were impressed by the clearly young and very smartly dressed population as they glided by on their motorbikes, iPhones at the ready. The streets were wide, lively and lined with all kinds of shops, restaurants and bars. As the sun set, which it does abruptly in this part of the world, we approached our hotel in Hoi An. It seemed very nice, but quickly Hoanh had us marching off to a dinner spot he deemed good and safe for tourists. He sternly admonished us not to eat the street food (which was all over the place). He said he would not eat the street food himself and he is 33 and assumedly had the right set of bacteria in his gut. ‘Nuff said.

What a different place than those we had seen so far! Hoi An is small and its many restaurants and bars line the river that bifurcates it. It is known for its lanterns and they were everywhere providing a colorful backdrop for many an Instagram moment. I recorded one of those myself. Here there were plenty of tourists–both young global adventurers and older folks like us. There were some Americans, but most seemed to be European or Australian. We were told that the two largest groups of tourists in Vietnam are normally Chinese or Korean. but since this was Life in the Time of Corona, both groups were excluded. This was sometimes weird, and perhaps gave us the wrong impression of the usual ethnic makeup of the place, but being able to actually see the sites we were visiting, and easily get a table at any restaurant, there were definite advantages. Plus I think people in the tourist trade were genuinely happy to see us!

When Hoanh gently deposited us at the restaurant, he gave us a card for our hotel so we could find our way back.  We would have been better off with bread crumbs!. It turned out that there were five hotels with the name Vinh Hung in Hoi An. They are known by the numbers 1, 2, 3, 4 and 5 and they all basically have the same address, or similar. We questioned lots of shopkeepers, who were friendly and helpful, but unsure. One led us down the street and told us to try one direction, and if that wasn’t right to try the other! It was pretty funny! But Hoi An is a small place and it wasn’t scary. Needless to say, we made it back and survived to make it to the next day.

After a lovely buffet breakfast at our hotel, the Vinh Hung Riverside Resort and Spa, not to be confused with others of the same name, Hoanh led us to the laundry across the street where they happily agreed to wash, iron and fold our clothes by 5 pm and for a ridiculously low price–much lower than prices at the hotel. We then hopped in our car and were driven to the UNESCO World Heritage site of My Son. 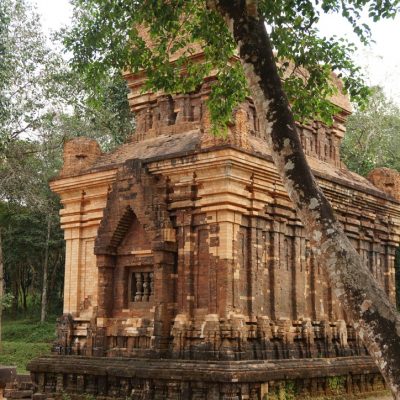 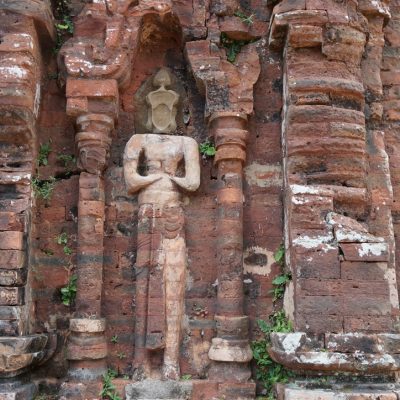 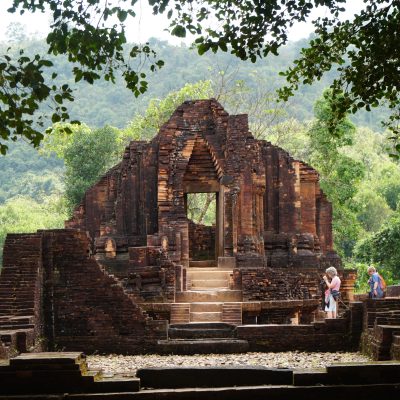 Here we learned about the ancient civilization of the Champa people, how they were forced to flee by the invading Viet and how this vast network of temples was abandoned and soon overgrown by jungle. In the 19th century some lost French soldiers uncovered some brick walls and before long French archaeologists were on the scene. Archaeological fever was spreading across Europe and although the scholars certainly pilfered a fair number of precious relics, they did excavate and preserve the site from the end of the 19th century until World War II. And in 1969 it was bombed by guess who? But now it is being cared for and is a fascinating place to visit, complete with electric shuttle buses and a theater that presents traditional dances. 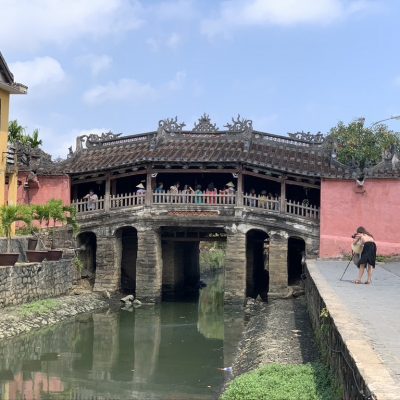 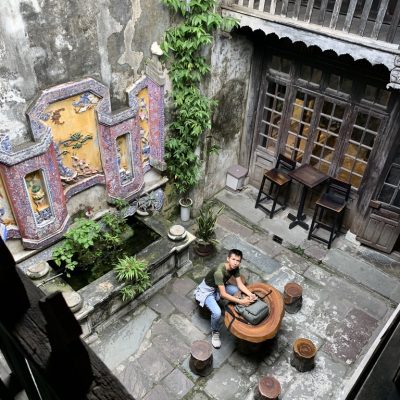 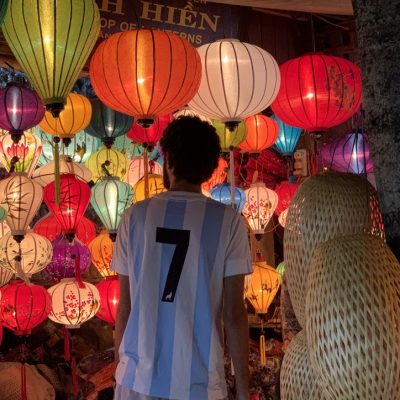 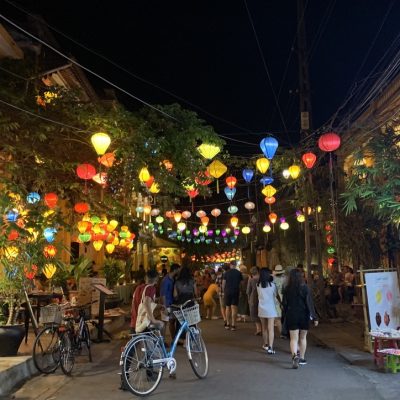 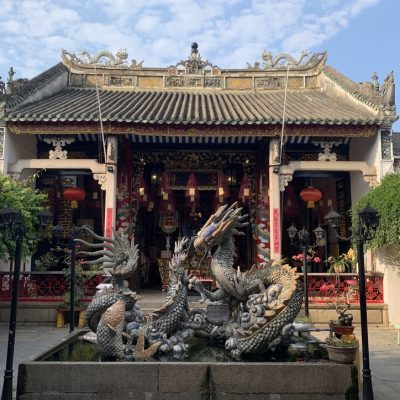 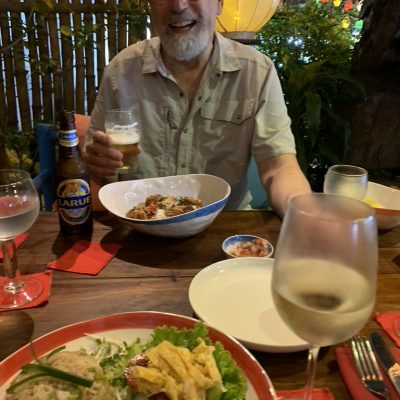 Lunch time found us back in Hoi An and another great restaurant. A walking tour was scheduled for the afternoon but I opted to stay at the hotel while Ray took in the sites with Hoanh. My feet were still swollen from all the airplanes, the heat and the salty (but delicious) food. By evening I was feeling better enough to go out for a stroll and take some photos of this pretty place and all its lights.

By the next morning, I was raring to go! Hoanh rented bicycles for us and led us through small village lanes, along the river and to the homes of some traditional artisans. We stopped for Hoanh’s favorite breakfast food of sticky fried rice–a sweet concoction of rice, peanuts, beans and coconut milk. Ray enthusiastically joined in, while I just had a bite. We saw rice noodles being made and got to help, we saw clay potters, boat builders and all the street vendors selling their fruits, vegetables and fish to the local population. 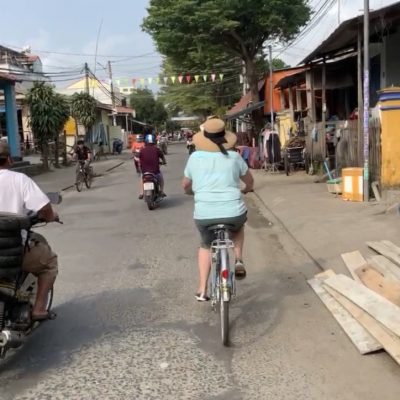 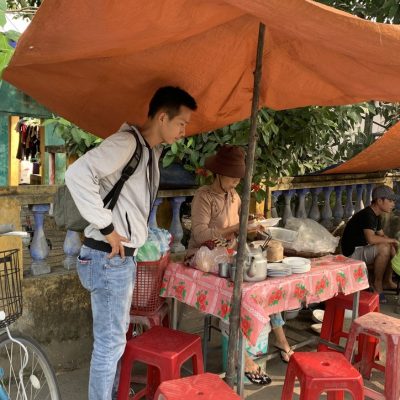 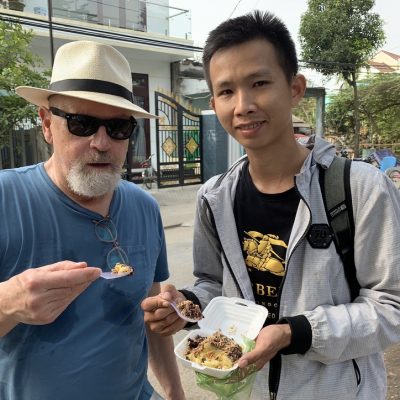 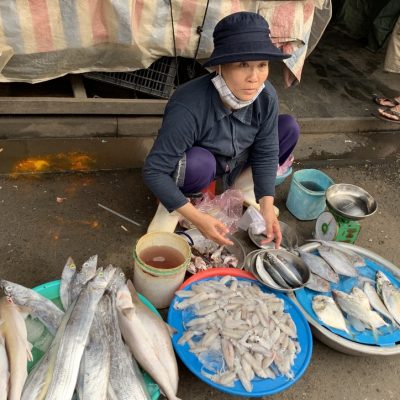 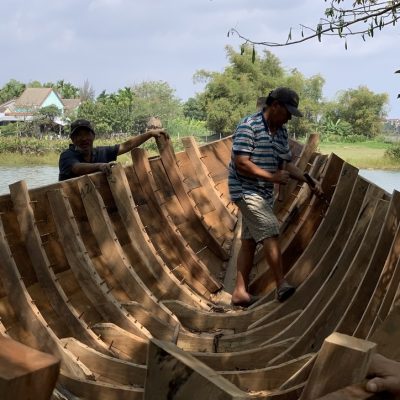 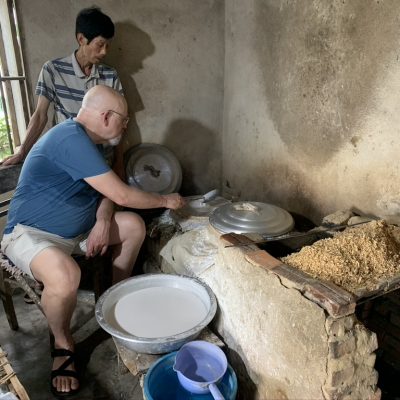 That afternoon, we were scheduled to leave for Hué, the ancient  capital of Vietnam and on the other side of the famous DMZ. We were to drive there, but since Hoanh was scheduled to meet another group at the airport, another guide accompanied us and explained the sites along the way. Her English was excellent and we chatted away for the four hour drive. We had to wind our way up across a foggy mountain pass and then had spectacular views of the sea before arriving at last to the Morin Hotel on the Perfume River in Hué. 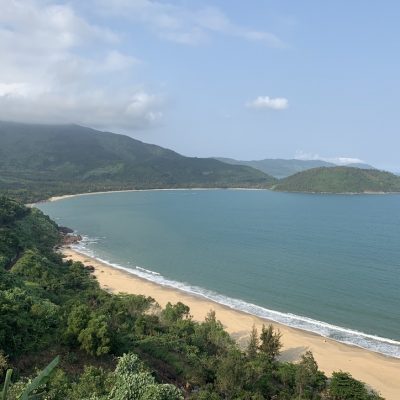 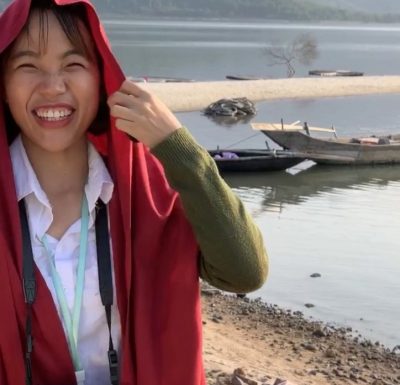 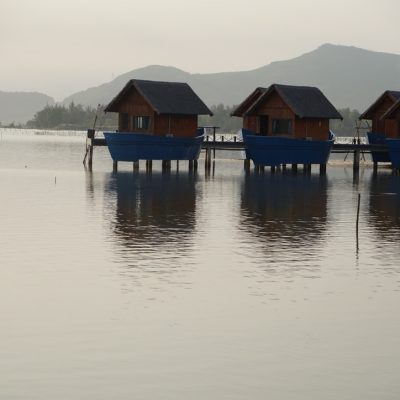 The next morning brought Hoanh back to us for a visit to the Imperial City. Hué  was the seat of the Nguyen Dynasty emperors and the national capital from 1802 to 1945. It has an enormous citadel and a temple with a monastery, elaborate gardens and the residential buildings of the king. It was really, really hot, of course but I climbed the 127 steps without complaint and wondered, yet again, at the beauty and enormity of these sites. 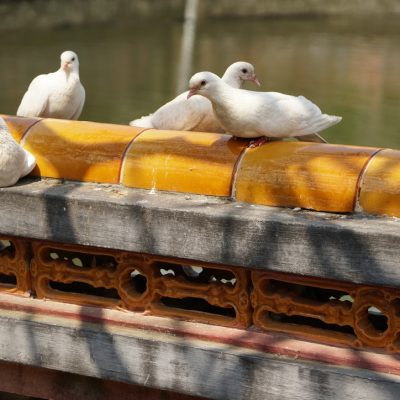 The Imperial City at Hué 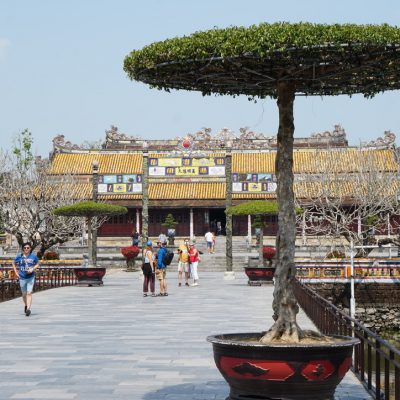 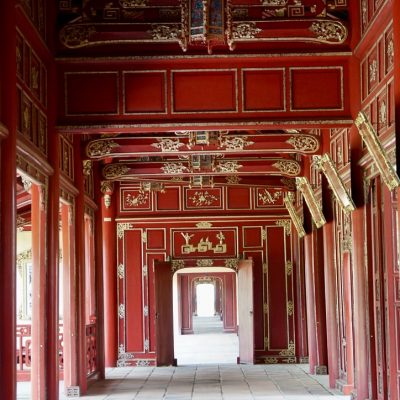 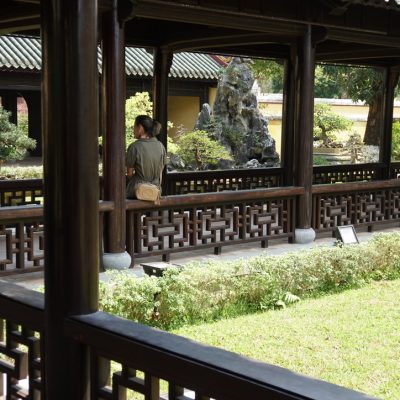 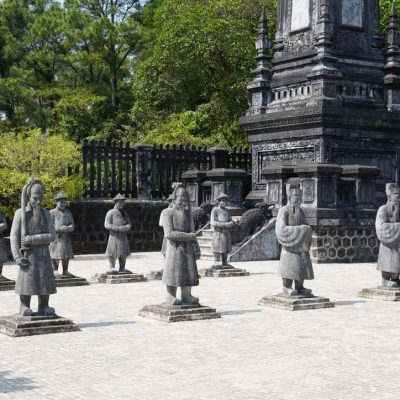 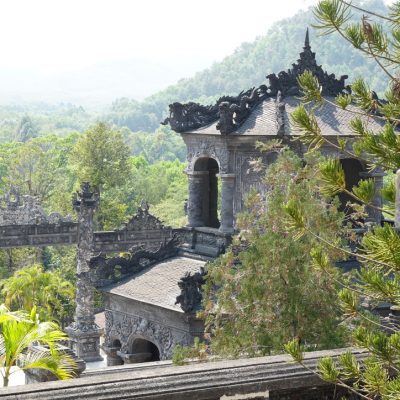 Before long, after a refreshing lunch, we were headed to the small local airport for a short flight to Ho Chi Minh City, aka Saigon. The airport was deserted. I mean, deserted!! A few people did show up before our flight, but we were beginning to get the feeling that the world was really changing. And not in a good way.