On my first trip to Egypt, I had traveled by dahabiya. The elegance and charm of that mode of travel can only be dimly imagined by those who have not experienced it. My boat had been equipped with every comfort including a grand piano in the salon and an outdoor sitting room on the upper deck. How many blissful hours did I spend there under the billowing sails, drinking tea and listening to the songs of the sailors while the magnificent panorama of Egyptian life glided by on either side. Villages and temples, palm trees, camels and holy hermits perched precariously on pillars. How fond were my memories of that journey…

The Curse of the Pharaohs by Elizabeth Peters, 1981 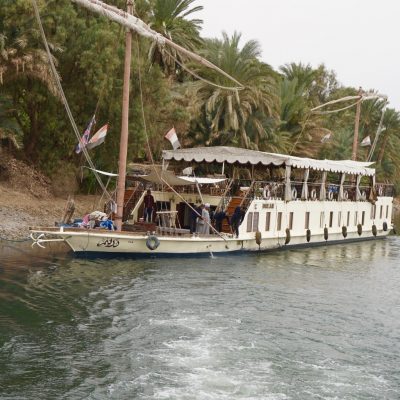 It is now coming up on two years since our magical trip to Egypt! Fortunately, I did create the Polarsteps map below which does give you a good idea of the spectacular places we saw. However, actually finishing up and writing this post just seemed so daunting. Bad idea to put it off though!

Quick plot summary! We abhor the idea of cruises–especially big ones–swimming pools, belly dancers and raucous bars are not our style.  But the Nile does obviously lend itself to travel by water. So inspired by my favorite 19th century fictional sleuth,  Amelia Peabody, the whimsical creation of the late Elizabeth Peters, I set out on my quest. Amelia had traveled the Nile by dahabiya, a small wooden sailing vessel popular on the Nile before there were steamers.  I yearned for a dahabiya and with the help of Google, I found one. The  Dahabiya Dream  was exactly what I had been searching for!

In February of 2019 we thus flew to London and then on to Cairo where we duly visited the great pyramids at Giza. From there a short flight led us to Luxor and on board the “Dream”. In the company of ten congenial and  like-minded travelers, a friendly and helpful crew of twelve, an outstanding chef, and a most magnificent guide named Ahmed, we sailed away. There were temples and tombs, there was music and laughter, there were purple and pink sunsets and glittering blue waters. There were enthusiastic souvenir vendors in wooden barques who pulled up along side the Dream to hawk their wares. There were drinks on the rug strewn upper deck. There were animated dinners under the soft light of bejeweled lamps, and there were quiet hours spent watching the banks of the Nile drift by. We were rocked gently to sleep in our cozy cabin and awakened by the songs of the muezzins as they called the faithful to prayer. There are tears in my.eyes as I recall the gentle beauty of that place, and of those people. My words fail me, but the map below has pictures. Each one is worth a thousand words, or so  they say.

So click on one of the circles on the map below and you should then be able to see our favorite photos along with some short descriptions.  On a desktop or laptop, the photos should appear on the left for you to scroll through and the interactive map will show you where you are. You can also click on an image to hop to that spot. The mobile version is a little less intuitive– images appear below the map, and you can click, then swipe through them. Happy Dreaming!