“Where’s Mimi?” asked my daughter to my then four-year old grandson. “In Morocco-docco!” came the unhesitant reply. And indeed we were!!

Originally, Ray and I were going to meet up in Morocco for a week during the year I spent in France–that is in 1979–but I decided to come home and see my family instead. Ray never quite forgave me, and the road not taken to Marrakesh had been haunting us ever since. Finally, it’s number came up in February of 2018.

Some people looked skeptical when we announced our plans. “Is it safe?”  “Is it clean?” were the questions embedded in those looks. But dear readers, fear not! It was everything we had hoped it would be, and so much more! Definitely worth the wait!

We did bow a little to those nervous stares and decided to try our first small-group tour instead of one of our usual DIY road trip adventures. We opted for a best-of-Morocco 9 day tour offered by a partnership between National Geographic Journeys and G-Adventures, a Canadian cultural immersion tour company that raises awareness of and money for local communities across the globe. The mission of G-Adventures is to get you closer to both the natural beauty of a place and to its native customs and traditions. You learn about geography, history, religion, food, and social mores. And through the knowledge gained grows increased understanding and compassion. Once again we were reminded that what binds us together as human beings far surpasses that which divides us.

And if you might still be harboring some fears about Morocco, let me just say that the infrastructure is French–great roads, great rest areas, great bathrooms. The food is healthy and delicious and I, with my sensitive digestive system ,had no problems.The people, who are almost exclusively Muslim, are warm and generous. We felt safe and accepted everywhere we went.

The downside of this kind of travel? The many, many hours in a van with little chance for veering off the chosen path. The possibility of not liking our fellow travelers (they were fine!). The lack of exercise. But these qualms were far out-weighed by the benefits–chief among them  was Mustapha, our funny, knowledgeable and indefatigable tour leader. Yes, we quickly knew that we could have done all this by ourselves, but the experience would not have been nearly so rich, and it would have taken a lot longer! Mustapha got us into places (like tea in a Berber tent, or an Islamic lesson in an inn run by women who were learning to support themselves) and explained perplexing questions about history and religion with knowledge and sensitivity. Although we were exhausted when we got home, we are already eager to return! 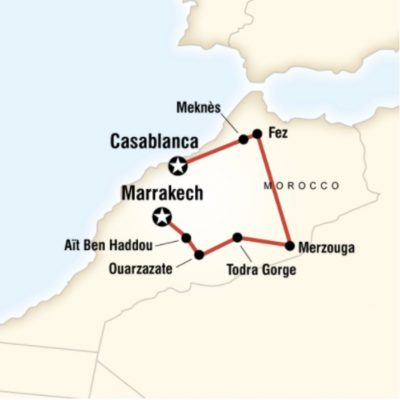 Our flight took us from Boston to Montreal to Casablanca. I would not do that again. Since then, when traveling beyond Europe we prefer to connect through London and spend a couple of days there before moving on. We have the time to do that, we’re retired!

It was a beautiful sunny day when we arrived in Casablanca. We were met at the airport and driven to our hotel. We would not meet our group until the evening so  we immediately set out to explore the medina and find the big Hassan II Mosque.

Initial impressions? Exciting, a little gritty and a little intimidating. It was our first experience in a mostly Muslim country and we were approached by smiling men wanting to lead us to their rug stores. There were cafes, but no women in them. There was delicious lunch, but no wine. This would take a little getting used to! First days are always a little jolting and we were glad when at last we met Mustapha and our fellow travelers and then got some sleep!

A sparkling morning greeted us and our van led us out of Casablanca and north to the beautiful city of Meknès. Meknès became the capital of Morocco in the 17th century under Moulay Isma’il and he built an enormous palace whose exquisite green and white tiled gates, Bab el-Mansour, still remain. The Heri es-Souani stables were also impressive–they once housed 12,000 horses!!

Meknès seemed much less daunting than Casablanca, and Ray and I were already feeling much more comfortable. We were amazed by the excellent quality of the roads (French engineering!), the many rest stops with delicious coffee and croissants or rows of steaming tagines outside,  and the incredible variety of landscapes. We were already saying to each other “We could have done this ourselves.” But ultimately, we were glad to have Mustapha, his endless knowledge about history and about where all the clean bathrooms were!

The surprise of the afternoon was our visit to the UNESCO heritage site of Volubilis! We’ve been to quite a few Roman ruins in our day, but the setting of these was spectacular! And topped with a stork nest, no less. We were sufficiently bedazzled by the time we rolled into the Royal Mirage Hotel in Fès that evening.