It was a spur of the moment kind of decision. Should we drive to Cahors today? A sleepy town on the Lot River about an hour south of our Airbnb in Beynac, Cahors is another place deeply embedded in our mutual memories of the summer of 1979. 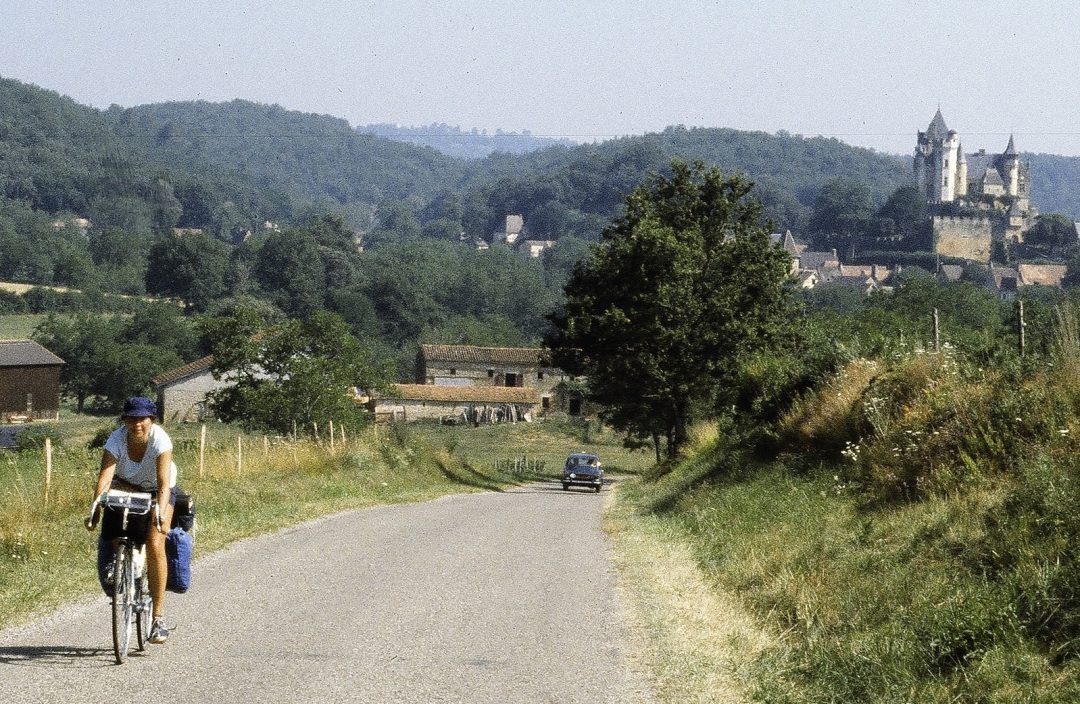 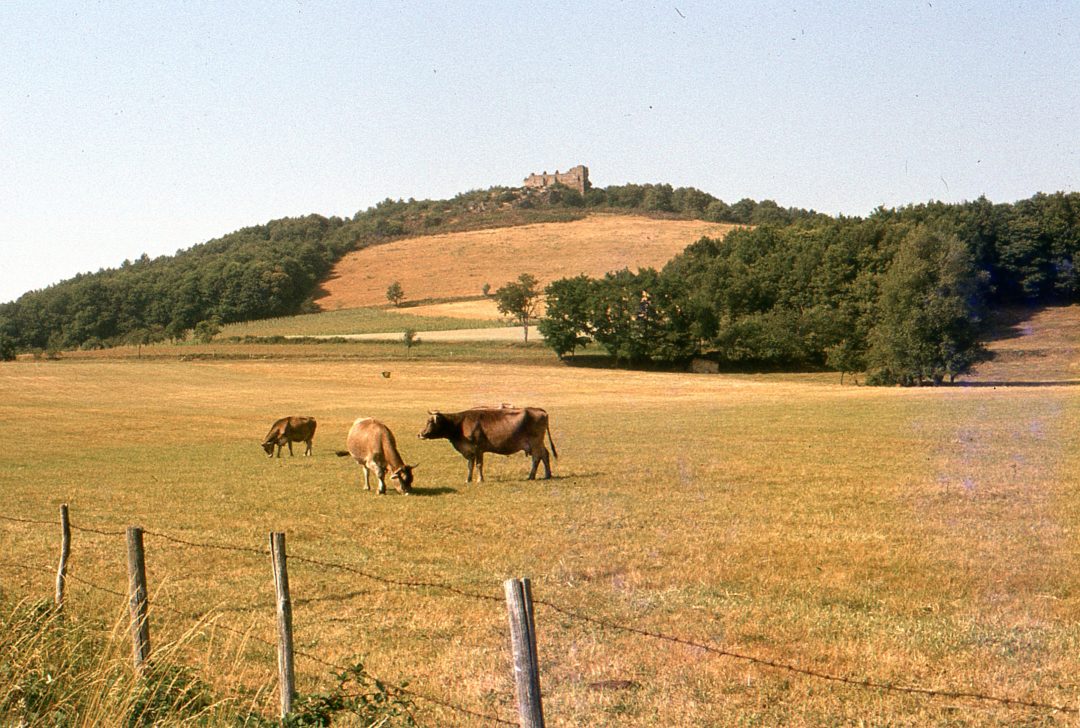 Cycling from Sarlat to Cahors 1979

We remembered a long, hot, arduous bike ride of fifty hilly miles or so down from Sarlat. Ray had been taunted into accepting  a little spontaneous bike race with a scrawny young teenager who pulled up beside us on the otherwise deserted country road. The problem was Ray and I were each carrying at least thirty pounds of gear, and as Ray leaned into a turn, the inevitable happened. He broke a spoke. There we were, a million miles from anywhere. He had a broken bike and an irate wife. As we pondered the few options available, a white station wagon carrying a French family pulled up next to us. Could they help? Again, options were discussed. The French dad suggested they put Ray’s bike on top of their car and Ray into the car with them, and I would follow to the next town, where we would find the inevitable bike shop, which was back then as inevitable as the cafe and the boulangerie. And so it was. I found Ray attempting to converse with two grumpy mechanics in the dingy garage of a bike shop. There I was, an American woman clad in shorts and riding a touring bike. They had never seen such a thing! And my French–newly minted from a year in Rouen–did the trick. The mechanics were then happy to chat amiably as the bike was quickly repaired, and we were soon sent on our way with waves and smiles to complete the final ten miles or so of that day’s journey. The temperature was soaring that afternoon, but the skies were blue as we triumphantly rode through the leafy broad avenues of Cahors.

Today the weather forecast predicted cloudy skies but a dry day. We knew we were going to make this trip one day this week and somehow we both agreed that today was the day. We thus set out à la recherché du temps perdu, so to speak. We remembered parts of the ride in fine detail, but of course a lot has changed. Along the way there was an Intermarché, for example, open today despite it being one of the innumerable French Monday holidays (Pentecost this time). Good thing, since we needed a few things for dinner. But the winding roads through the quiet towns with their gold stone buildings and steeply pitched dark red tiled roofs remained the same. The countryside here is hilly without being mountainous, and the farmland is interspersed with dense wooded knolls. Then there was the Lot, a wide twisty river of steely gray. Cahors, much bigger than we remembered, gradually unfolded around us. It seemed deserted. It was deserted, because it was a holiday. Duh. Pretty much everything was closed. But fortunately, not every everything.

As we drove along the river headed towards Cahors’ famous medieval bridge, we saw one outdoor cafe that seemed to be open. We parked the car and walked back just in time to get the last free table at a local products shop/wine bar called Les Petits Producteurs. 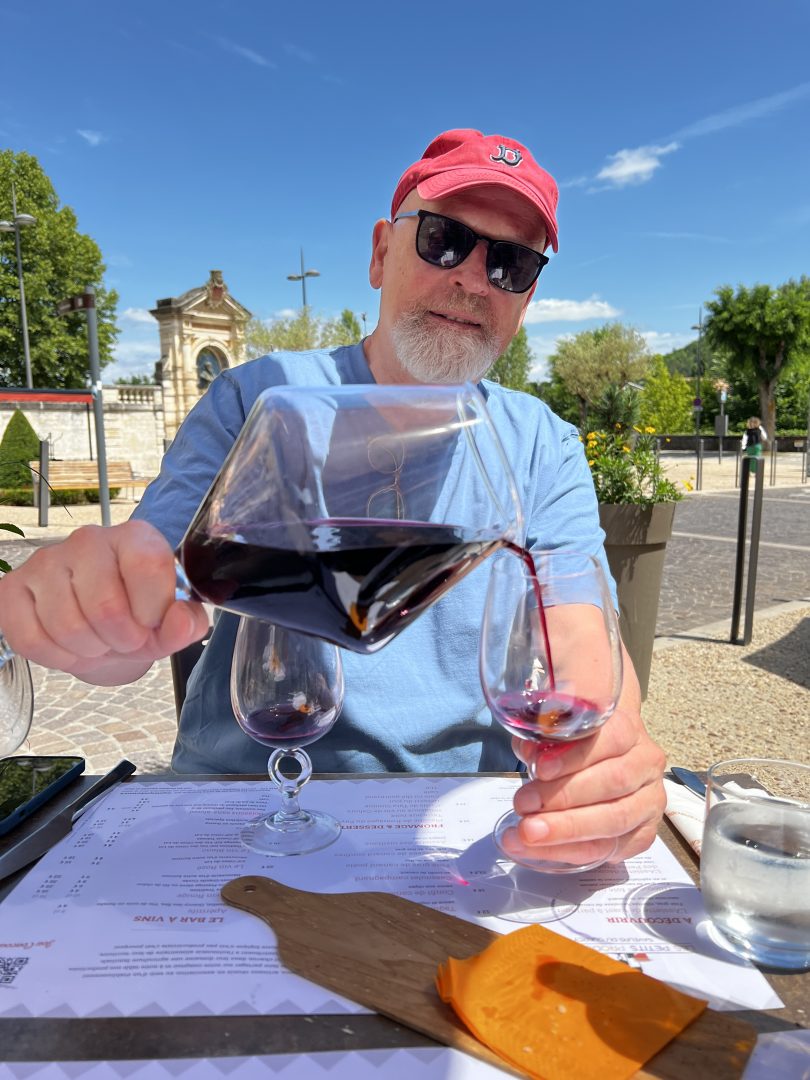 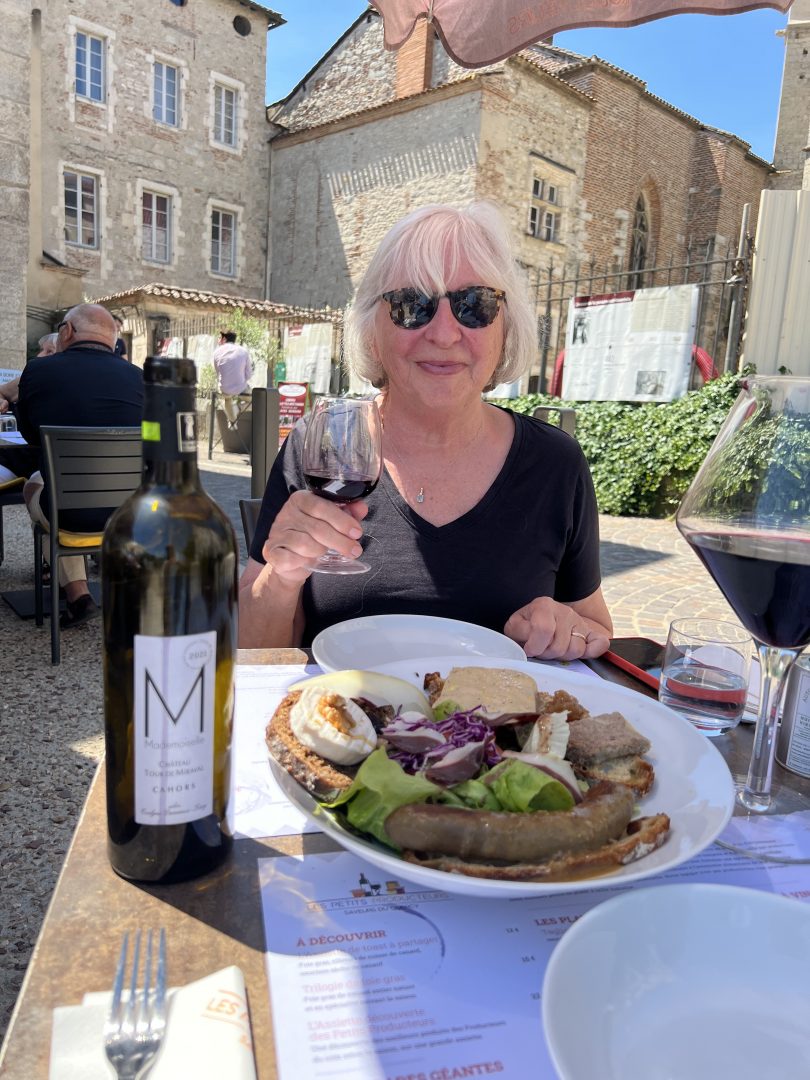 What a find! Before we even had a chance to order a bottle of wine two thin slices of baguette with a generous dollop of foie gras appeared at our table. Here we are in the land of duck fat, and it was everywhere! We ordered a giant “assiette découverte” to share and were treated to sausage that was 20% foie gras, paté de campagne, onion chutney, chèvre, thinly sliced smoked duck breast and a fresh salad. We could have quit right there, but of course if there is a café gourmand going, it has to be ordered. Was it the best meal we have had in three weeks of travel? Quite possibly.

Having shared an entire bottle of a delicious Cahors–a 2021 Mademoiselle from Chateau Tour de Miraval–we did not immediately hop back in the car.  Believe it or not, that much wine at lunch is not our norm!  Instead, we chose to wander around a bit. That is our norm! Cahors has two sites classified by UNESCO. as world heritage sites. The first was directly behind us as we ate lunch–the Cathedral of Saint-Etienne. Begun in the 12th century with a Romanesque double domed nave and clear Moorish influence in its geometric and floral bas reliefs, it was completed with a full Gothic stain-glassed choir. To the right of the choir there is a lovely cloister with a central garden of lilies. Saint-Etienne was much, but not always well, restored but it is, nonetheless well worth a visit. If you go, you will not be alone, since it is a stop along the network of pilgrimage routes to Saint Jacques de Compostelle, as it is known in French,  and you are sure to see many solitary hikers,  often exhibiting the symbolic scallop shell on their backpacks. The word for scallop in French is Saint Jacques. 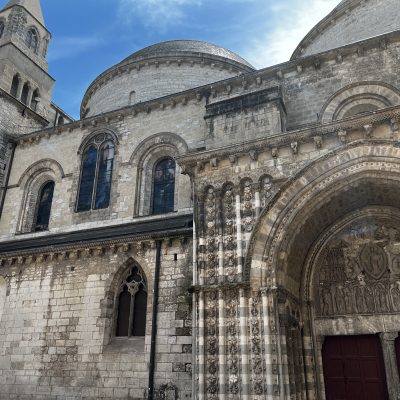 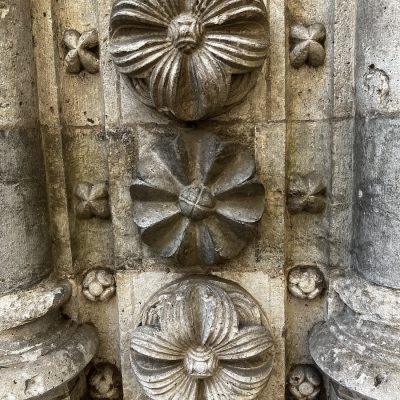 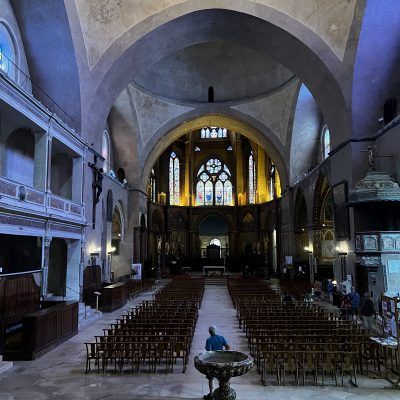 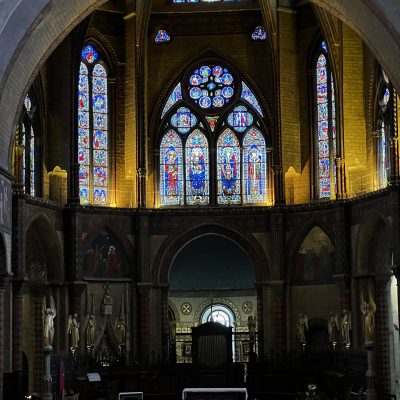 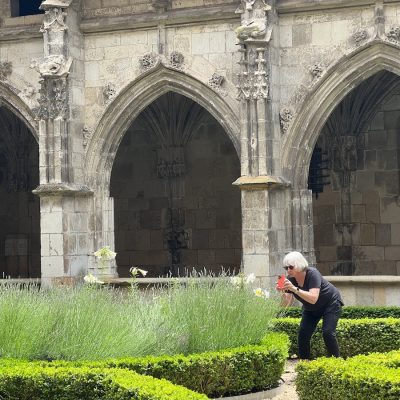 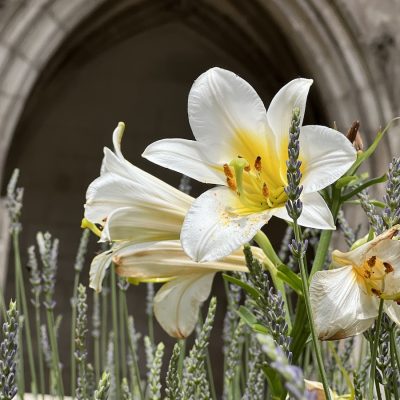 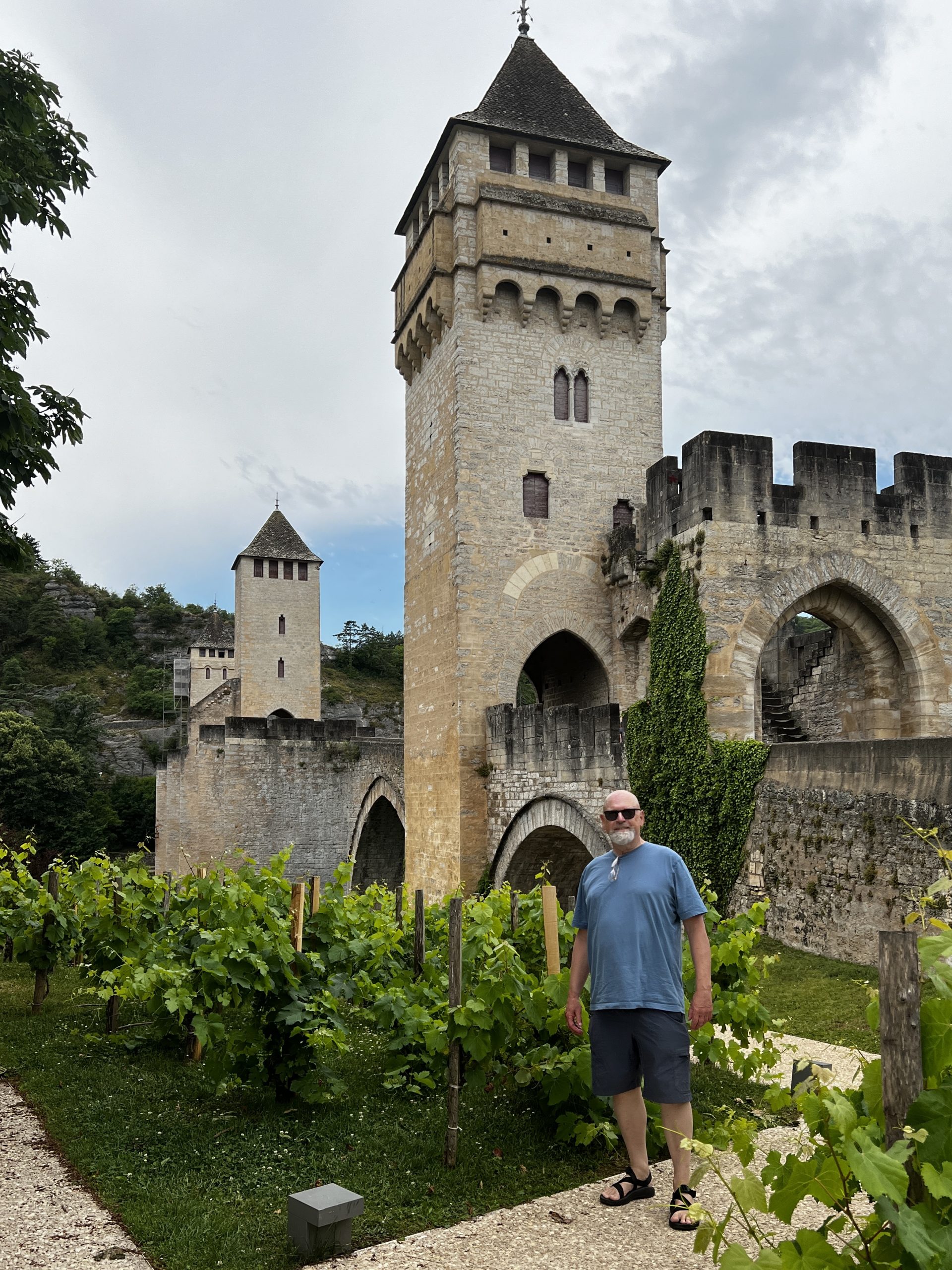 The other site not to miss is the medieval Pont Valentré, an astonishing medieval bridge indicating the importance of Cahors as a strategic site during the Hundred Years War in the 14th century. Here, Ray and I have somewhat different memories. He remembers that we rode across the cobblestone bridge to nowhere just for the experience. I remembered refusing to do it. But we did both remember the bridge, and we eventually crossed a different bridge on our way to Toulouse.

This time, with one parting view of a magnificent city, we drove back to Beynac through the beautiful countryside of the Lot and Dordogne. 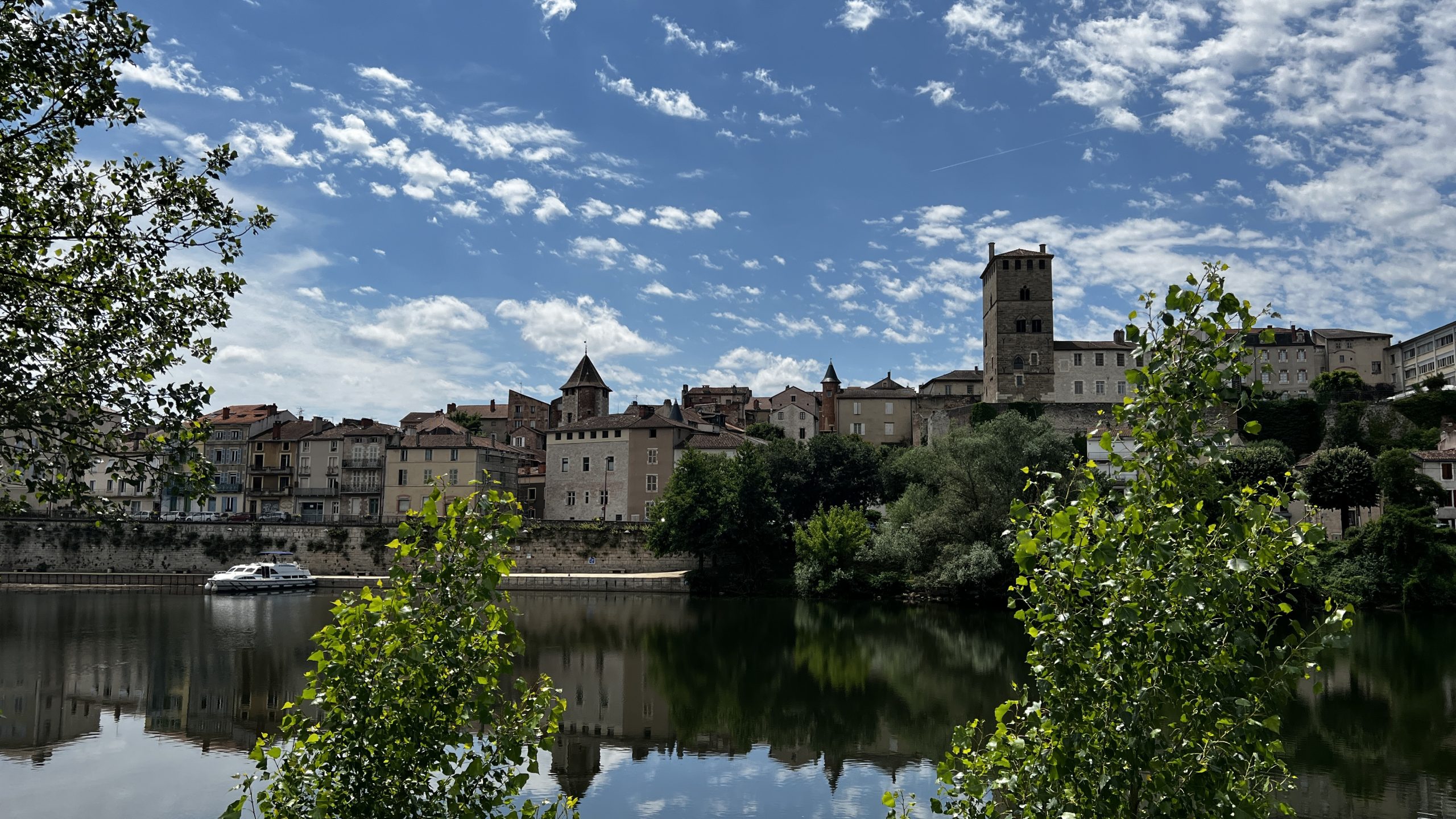 Cahors on the Lot